[Note: this post has been updated to correct errors in the previous version. We do our best to produce accurate reporting, but when we make errors we strive to be transparent. Corrections will be indicated in the post with text and explained in italics within [square brackets]. A full explanation is provided at the end of the post —Anonymous Comrades Collective]

In our last report, we exposed the neo-Nazi podcaster Diana Brancoveanu, aka Simona Thrussell, a Romanian of Jewish heritage who uses the alias “Pikachu.” While she now has her own podcast on which to vomit racist and antisemitic garbage, her debut was on a long-running white nationalist podcast called “Illusion Radio,” hosted by someone who calls himself “Doctor Illusion.”

It’s time to drop the illusion and get to know the people behind the personas. Allow us to introduce Brandon Keith Langham and his equally racist [supporter] wife Veronica Nicole Langham (née Cannon), a.k.a. [@ElitistMouse on Twitter] of Jacksonville, Florida.

Illusion Radio began as a regularly scheduled podcast in late 2015 and early episodes featured interviews with various “celebrities” of white nationalism like Robert Warren Ray, aka “Azzmador” and Douglass Mackey, aka “Ricky Vaughn.” Apparently the quality of the podcast was not enough for Mike Peinovich, aka “Mike Enoch,” of the neo-Nazi podcast “The Right Stuff” who chose not to affiliate with “Illusion Radio.” It was later promoted by neo-Nazi Andrew Anglin of “The Daily Stormer” website. 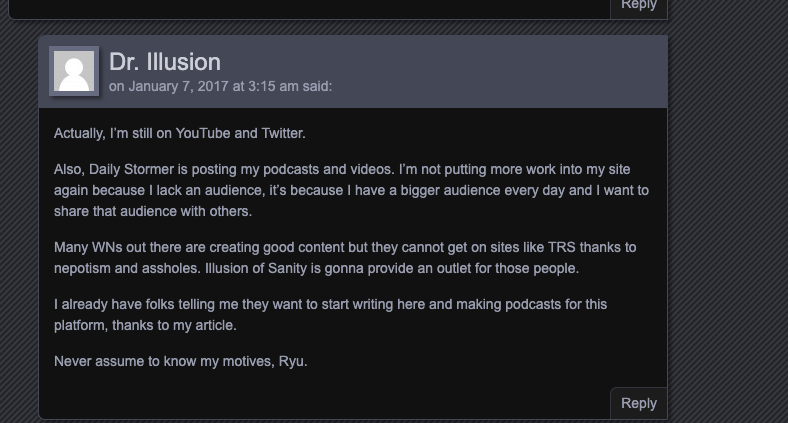 “Doctor Illusion” or “Doc Illusion” had an unbelievably dull radio personality but this didn’t stop him from making friends or getting guests to appear on his show, like the aforementioned Jewish neo-Nazi Diana “Pikachu” Brancoveanu who substituted for “Doc Illusion” as host when he took a long hiatus from the show. Brancoveanu had dozens of episodes of her own podcast on the Radio Illusion website until recently when she removed them after we exposed her.

And lest we be accused of throwing around the label “neo-Nazi” haphazardly, rest assured “Doctor Illusion” is most definitely a neo-Nazi. He openly expresses admiration of Hitler, as demonstrated on blog posts and social media.

“Doc Illusion” also spent a fair amount of time on Twitter, where he posted his racist tweets under the user names “@DocIllusion” and “@douchecc.” 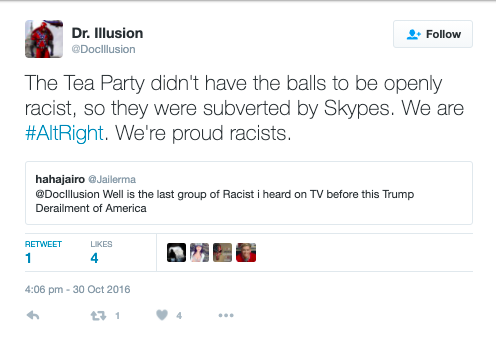 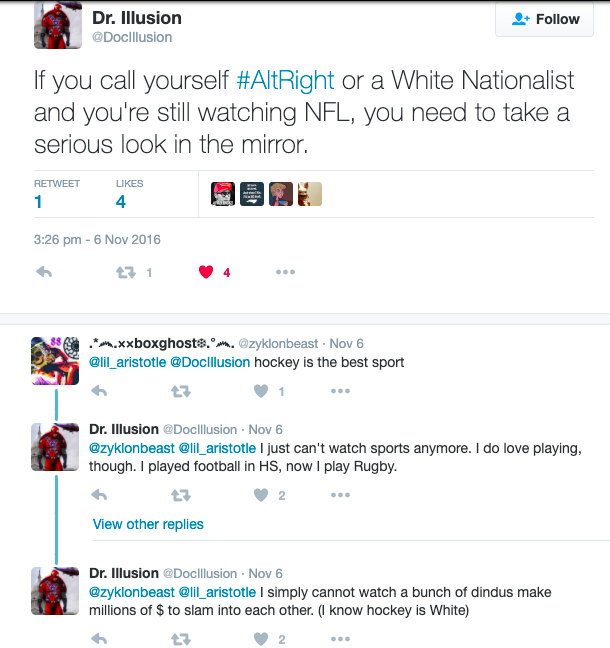 Casting Aside the Illusion

“Doctor Illusion” sounds like the name of a dumb comic book supervillain; but it gets dumber. One would think it would be wise to separate one’s everyday identity from one’s white nationalist persona, at least for the sake of maintaining regular employment. It seems “Doc Illusion” had a rather tenuous grasp of this concept. For example, “Doc Illusion” several times posted a photo of himself with his [co-host] right on his Twitter profile.

As mentioned at the beginning of this report, Mrs. “Doctor Illusion” was a frequent co-host on “Illusion Radio” and used the alias “Lady Misogyny.” More on her later [also, please see update].

“Doc Illusion” also enjoyed showing his face on his YouTube channel where he used the unfunny and unoriginal user name “SirOssisOfLiver” and posted videos of his rambling musings. 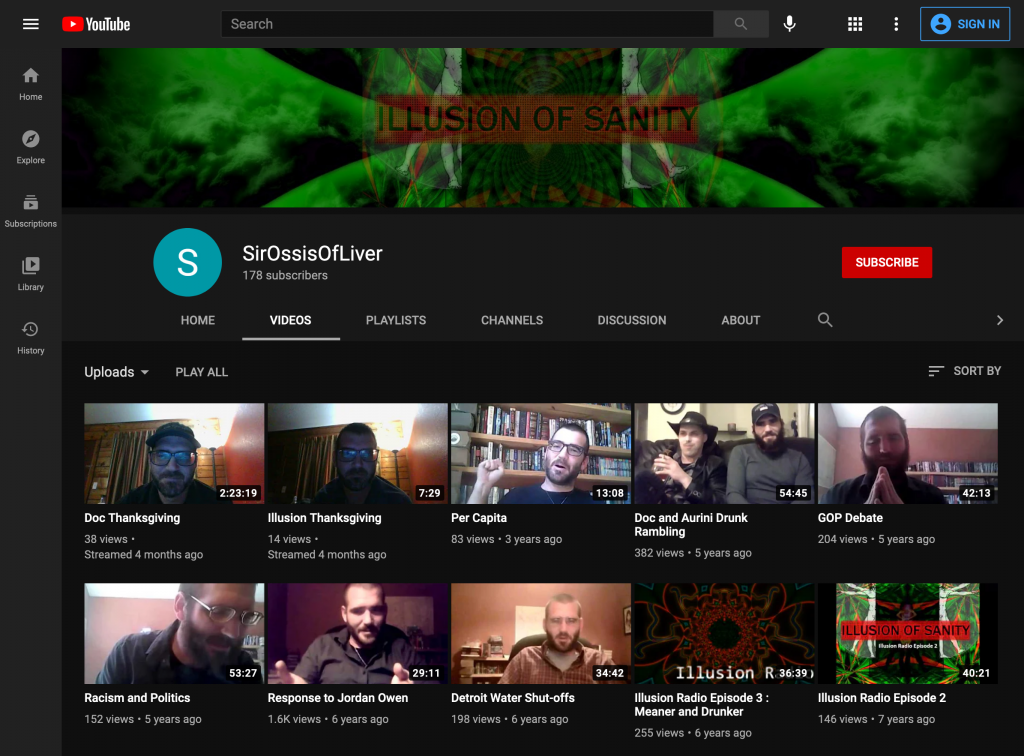 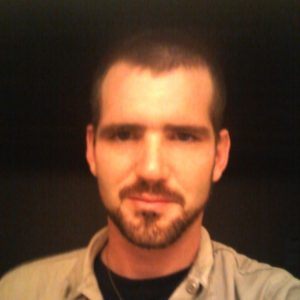 While he is “Doctor Illusion” on his white nationalist podcasts, he is really Brandon Keith Langham and claims to be an electrician and instrument tech at Westrock Company in Jacksonville, Florida, according to his public LinkedIn profile. 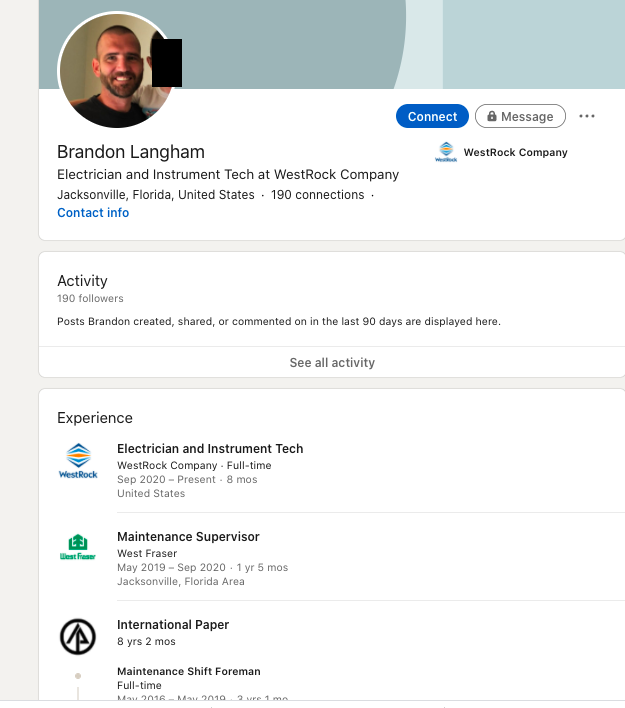 Like a lot of right-wing yahoos, Langham likes to lie about military experience. In one thread on Twitter Langham, writing as “@DocIllusion” claimed to have been “Recon,” alluding to the United States Marine Corps Force Reconnaissance detachments.

Looking into Langham’s history, however, we have found no records indicating that he has ever served in any active-duty military service branch.

In addition to pretending to be a marine on Twitter, Langham also attempted to assert his sexist view of “masculinity” by involving himself in the so-called “men’s right movement,” also known as the “manosphere.” He is a long-time friend of Canadian “men’s rights activist” (ie. misogynist), “race realist” (ie. racist), Gamergater and all-around creepy-guy video blogger Davis Aurini.

Their bond of friendship was forged in Twitter battle as Langham came to Aurini’s defense when YouTube vlogger Shoe0nhead made Aurini feel bad online. 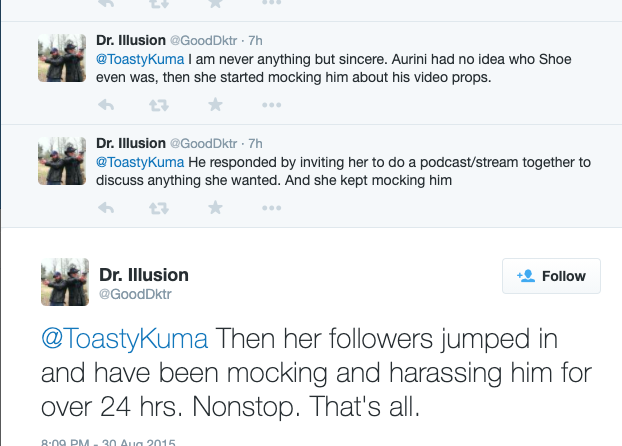 When it comes to relations between the sexes it seems that Langham has always had a problematic history with women. At one point he was even arrested for 2nd degree rape, although he later states in a blog post that he was acquitted of this crime. He does admit to slapping the “hell out of” his accuser prior to his arrest, though.

Langham has also made statements on blog posts that get close to (if not cross) the “creepy” threshold regarding the appropriate age for female sexuality like:

…remember, when you call someone a pervert for having sexual thoughts about a girl under 18…find out how old your grandmother and great grandmother were when they started having children.

He claims to have “started dating” his wife Veronica Nicole Langham (née Cannon) when “she had just turned 19” and he “was 25.”

Veronica has had run-ins of her own with the law, not that we really care about that.

What concerns us is her participation on a white nationalist podcast and her racist Twitter posts.

Other posts made by Veronica Langham on Twitter seem to corroborate Brandon Langham’s penchant for young women, even if they seem to fudge on the age narratives a bit. If you will recall, Brandon Langham claimed they started to date when she was nineteen. We guess they figure “age is just a number; why sweat the details?”

Neither Brandon nor Veronica can complain too much when they are exposed as white nationalist podcasters, especially when they have from early-on been happy to show their faces on public platforms. [{Please see the update]

Brandon Langham claims to have been doxed before. We could not find evidence of this, but we are happy to make sure a second time sticks.

Although Brandon Langham’s previous Twitter accounts have been suspended for violating Twitter’s terms-of-service regarding hate speech, he has resurfaced as “@Vamos26Pedroso,” an account that appears to have been purchased from a previous user.

As mentioned above, Brandon Keith Langham was last know to work at Westrock Company in Jacksonville, Florida as an electrician. It does not appear that Veronica Langham is employed at the time of writing.

In our original report we stated that Brandon “Doc Illusion” Langham’s co-host “Lady Misogyny,” aka “Mistress,” was his legal wife Veronica Nicole Langham. This is incorrect. While Veronica Langham does indeed go by “@ElitistMouse” on Twitter and is indeed a racist and a white nationalist and does indeed heavily promote her husband’s neo-Nazi podcast, she is not the former co-host of Illusion Radio “Lady Misogyny.” That dubious honor belongs to Afton Olivia Hardin of College Station, Texas.

After we posted the article, Brandon Langham reached out to us on Twitter to inform us that we were incorrect on a certain. Namely, he told us we had confused his wife Veronica Langham with someone else.

We do regret this error and are appreciative that Brandon Langham was helpful enough to expose his fellow white nationalist and former co-host “Lady Misogyny,” whom we now know to be Afton Hardin.

In our defense, Brandon Langham claimed in his podcast show notes that “Lady Misogyny,” aka “Mistress,” was his wife, and the facial features of Afton Hardin and Veronica Hardin are not entirely dissimilar, especially considering a weight gain of twenty or thirty pounds, give or take.

We should, however, have done more follow up on the noticeable tattoo present on Afton Hardin’s chest, visible in the YouTube video mentioned earlier in the article. Photos of Veronica Langham posted publicly on Facebook and taken after this video was posted on YouTube show that Veronica Langham does not have this tattoo.

This tattoo is present on other public Facebook photos of Afton Hardin. 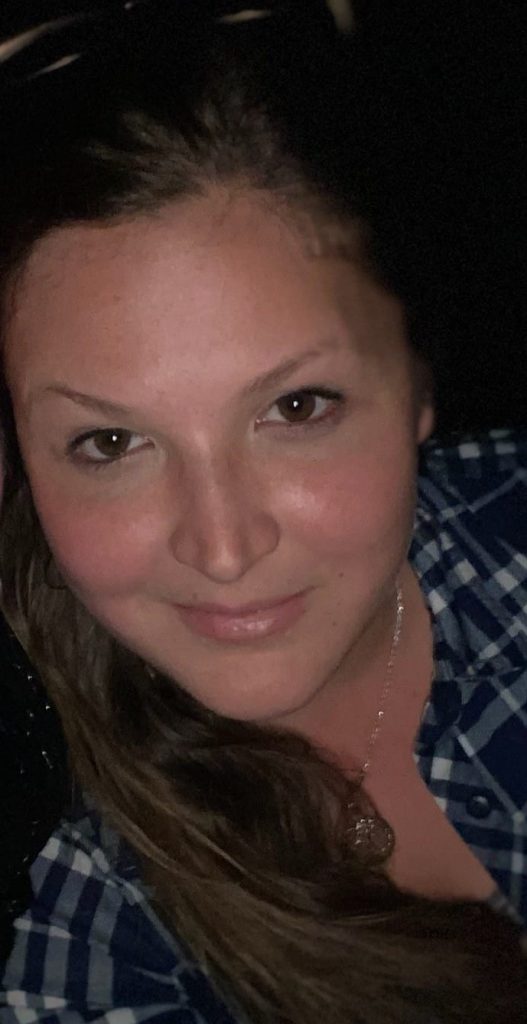 Now that Afton Hardin has broken up with Brandon Langham it looks like she disagrees with his predilection for underage women, according to her Facebook posts.

So there you have it: “Lady Misogyny” aka “Mistress” is, in fact, Afton Olivia Hardin of College Station, Texas. According to her public LinkedIn profile she is employed at Sanderson Farms as an “evisceration floor worker.”

We apologize for the mix-up.

We do, however, have issue with Brandon Langham’s claim that his racist wife Veronica is not upset by her exposure since she decided to set her Twitter account (@ElitistMouse) to “protected.”

All information presented in this article has been sourced from publicly available material.