The 2017 “Unite the Right” rally brought hundreds of violent neo-Nazis and other extreme-right elements converging on the city of Charlottesville with intent to do harm to counter-protestors who opposed their message of white supremacy, anti-semitism and hatred of LGBTQ communities. Many of these individuals have since been identified, forcing them to face public scrutiny for their actions, yet some seem to have slipped through the cracks. One of these individuals is a person whom we refer to as “Swastika Pin,” due to the enamel Nazi pin he wore on his shirt at the rally. 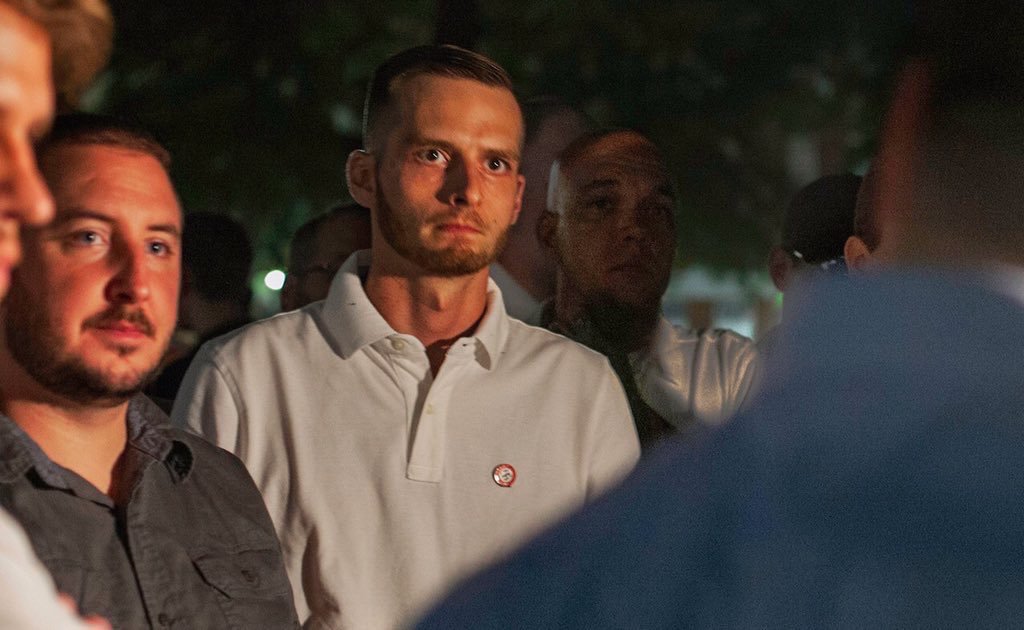 “Swastika Pin” was one of the more violent participants in the rally and he has eluded identification for three years, but now we have uncovered his identity. In this article we will provide the background of this individual’s neo-Nazi activities as well has his true identity and current activities.

“Swastika Pin” was a very visible participant in the the “Unite the Right” rally and was prominent in the Vice News production “Race and Terror” where he could be seen marching with a crowd of neo-Nazis wielding torches and chanting “Jews will not replace us” on August 11, 2017.

Activist and data scientist Emily Gorcenski came face-to-face with his hatred as he shouted inches from her face and assaulted her and others. She captured the incident on video and posted it here. We have clipped a portion of her video for viewing here (note: video may be unsupported in mobile browsers):

Alarmingly, there is evidence that “Swastika Pin” planned to commit acts of violence at the rally as indicated by these screen shots from organizer Jason Kessler’s live stream: 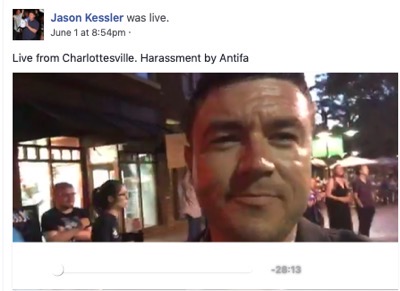 Another screenshot of a comment made by “Swastika Pin” (writing as “Hüdson La’Beauxl”) on Facebook also indicates that he intended to commit violence upon Emily Gorcenski, this time implying that he would kill her. 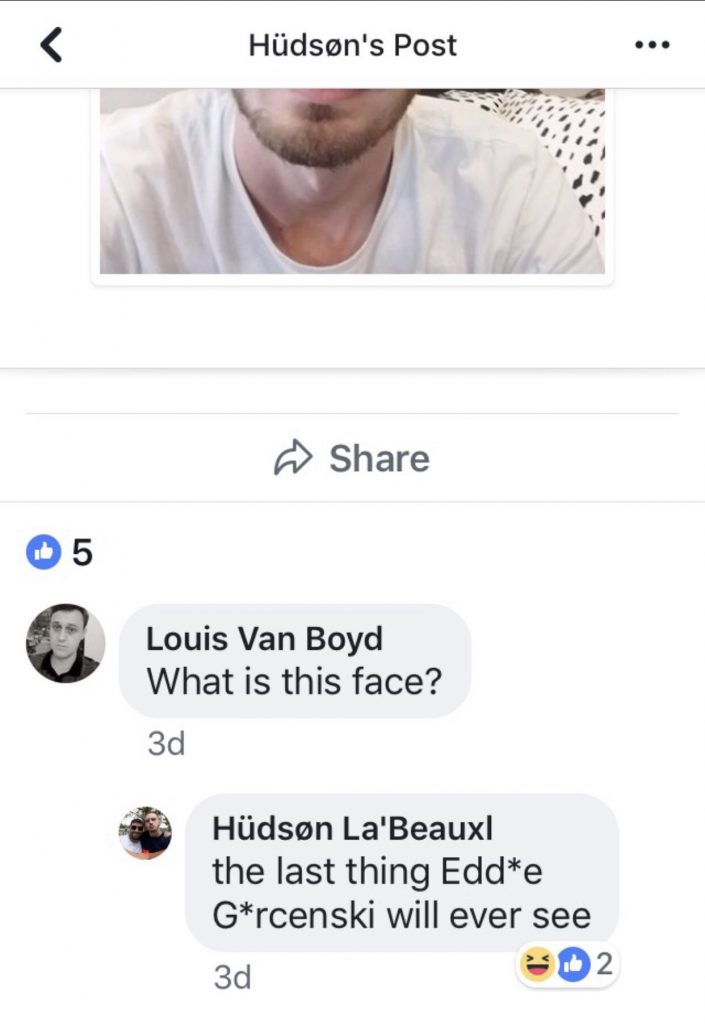 “Swastika Pin” was also prominent on the next day of the rally, August 12. 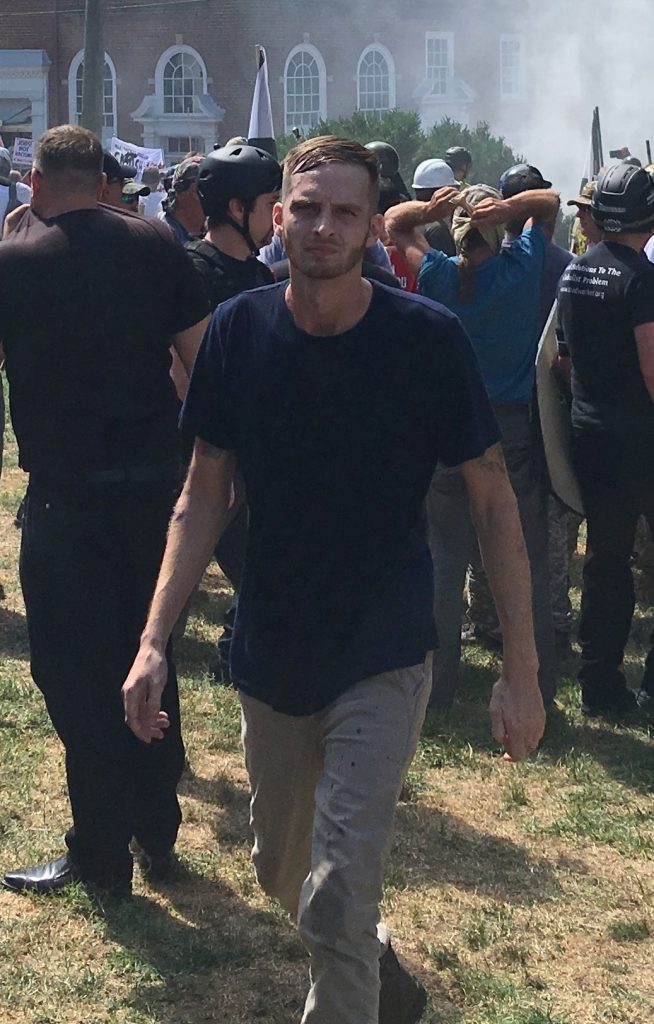 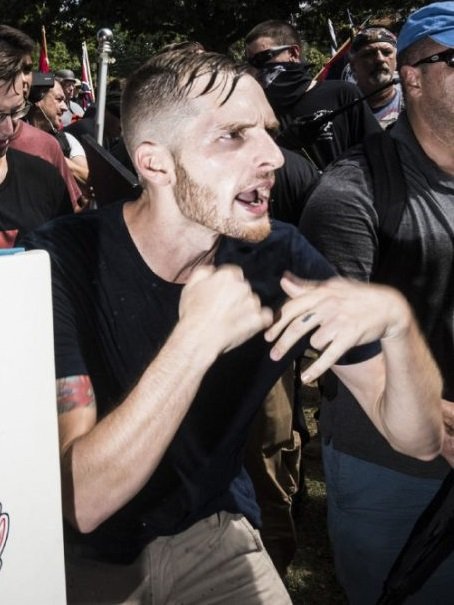 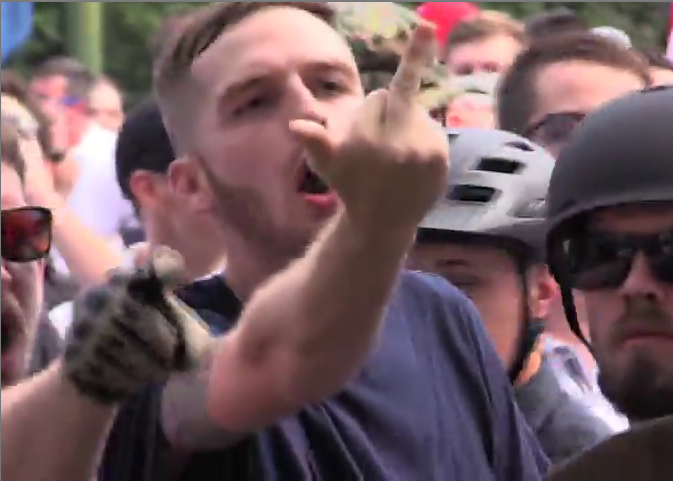 “Swastika Pin” wasn’t shy about his violence that day either, as evident by this interaction with neo-Nazi Christopher Cantwell:

Emily Gorcenski had done significant research on this individual and found several clues to his identity that would prove to be critical later, such as the fact that “Swastika Pin” was likely a Florida resident and likely had ties to the city of Winter Haven.

In fact, it was Emily Gorcenski who coined the moniker “Swastika Pin,” but he has used a variety of aliases across the internet, such as “Hudson Vandal,” “James Hudson Vandal” and variations of those names, as well as variations of “Kovalev.” In the Discord leaks provided by Unicorn Riot he can be found using the handle “subhuman” as he chatted with fellow neo-Nazis. In one of his early posts “subhuman” points out that he appears in the Vice News segment.

In the invite-only Bowl Patrol Discord chat fellow neo-Nazis, such as “Tactical Bowlcut” (Robert Kehne Moeller) and “Vic Mackey” (Andrew Richard Casarez), members of the “Bowl Patrol,” even altered images of him, placing bowl-style haircut images on his head along with a headband that reads “kill Jews,” a sign of his acceptance into the Bowl Patrol circle. The Bowl Patrol, as we have written about in earlier articles, is a loose organization of neo-Nazis who admire the racially motivated mass murderer Dylann Roof. “Swastika Pin” also seemed rather good friends with a racist named James Michael Gallagher. Here are the two together in a photo taken by Moeller in a Charlottesville hotel room arranging bowl cuts.

More on Gallagher may be found here.

Discord user “Erika” (Erica Joy Alduino) posted a photo in which “Swastika Pin” participated in a demonstration with other well-known neo-Nazi figures. This took place in front of the Pulse nightclub in Orlando, Florida where a mass shooting had occurred nearly year prior. 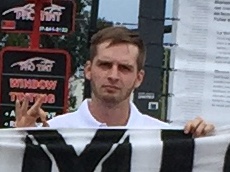 We know the two were fast friends from a post on William Fears’ Instagram account that shows them posing together, along with other neo-Nazis in a fight gym.

Much of “subhuman”‘s discussion in the Discord leaks had to do with a white supremacist who wished to leave the movement and decided to go public. This person provided an “Ask Me Anything” post on Reddit and provided a link to a video in which members of his group had gathered and chanted “gas the k*kes.” “subhuman” states that he was in this video and states as well that he started the chant.

Examining the video, we can indeed find “Swastika Pin” or “subhuman” present. 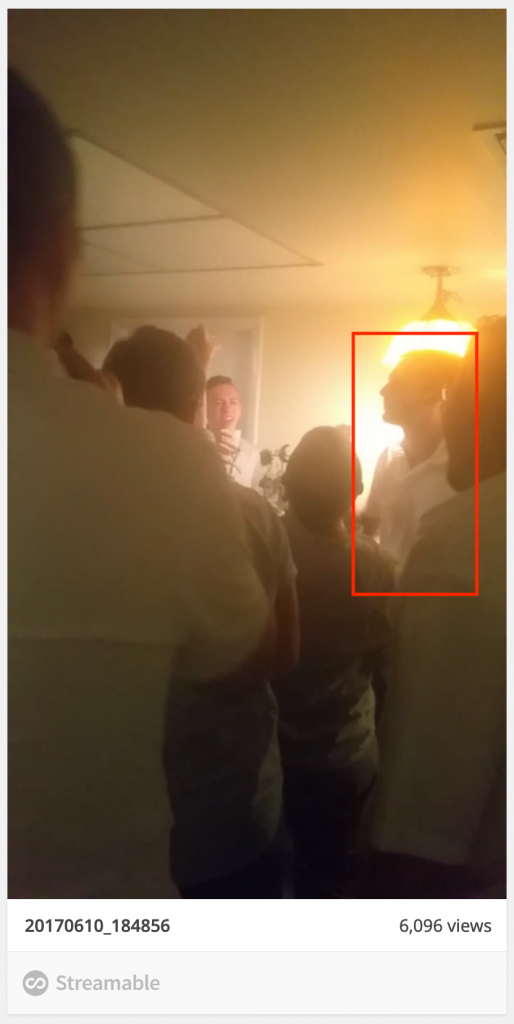 The distinctive profile of “Swastika Pin” is immediately identifiable. 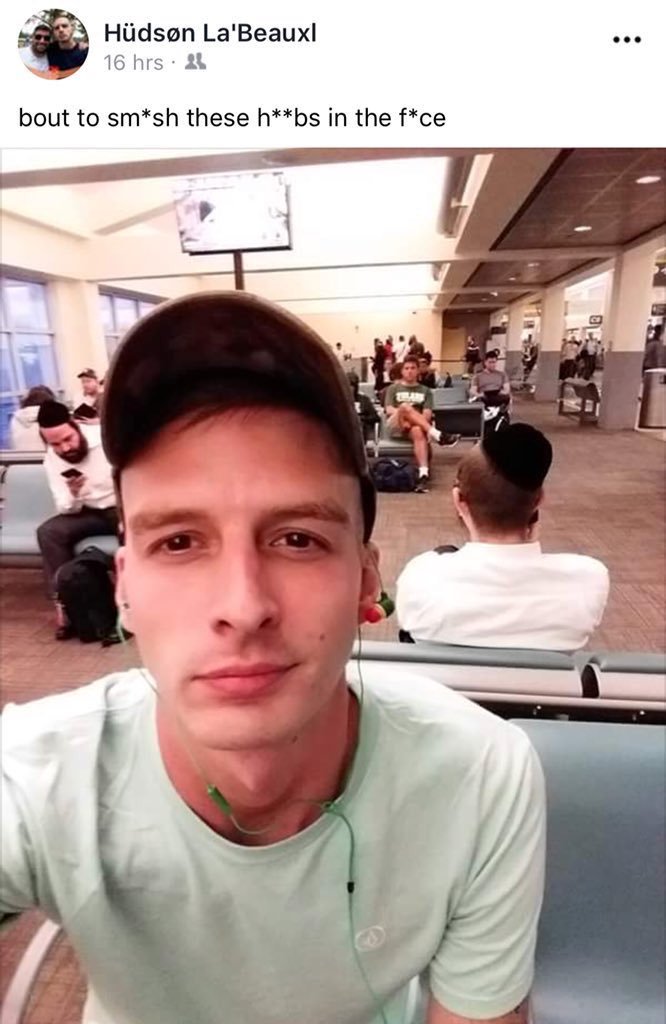 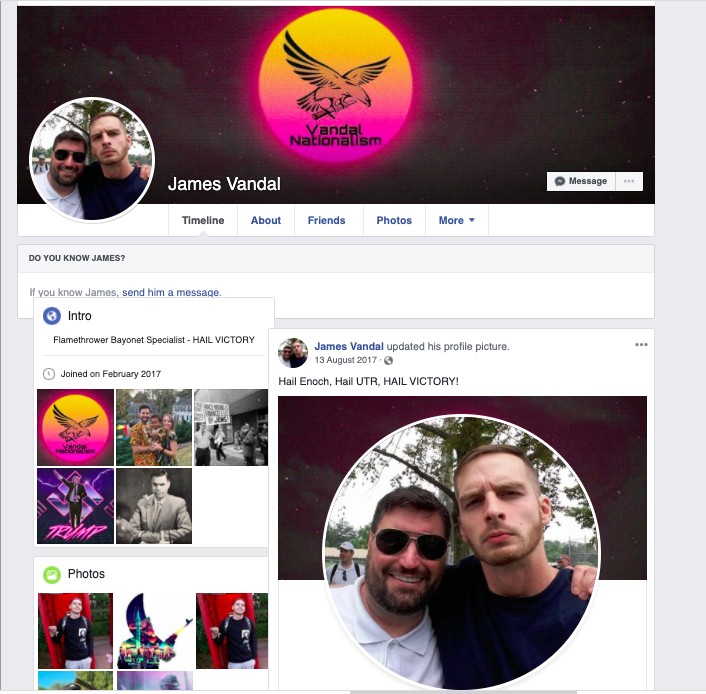 In a Twitter post he mocked the victims of the Pulse nightclub shooting on the one-year anniversary of the event. He was also here two days earlier at the banner event mentioned earlier. 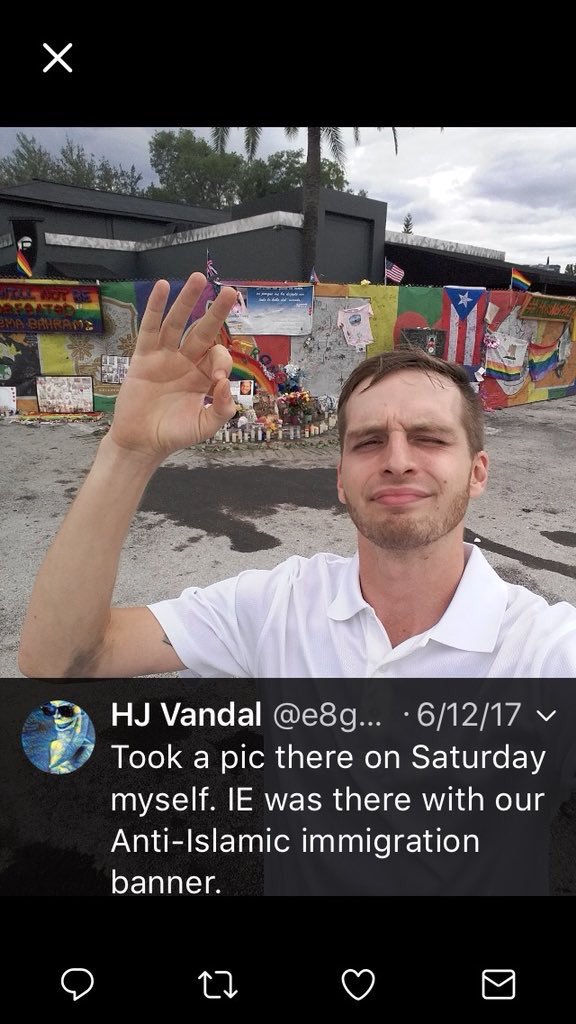 In another post “Swastika Pin” does the “white power” hand signal while kneeling next to a “RAHOWA” bumper sticker. For those unaware, “RAHOWA” stands for “Racial Holy War.” 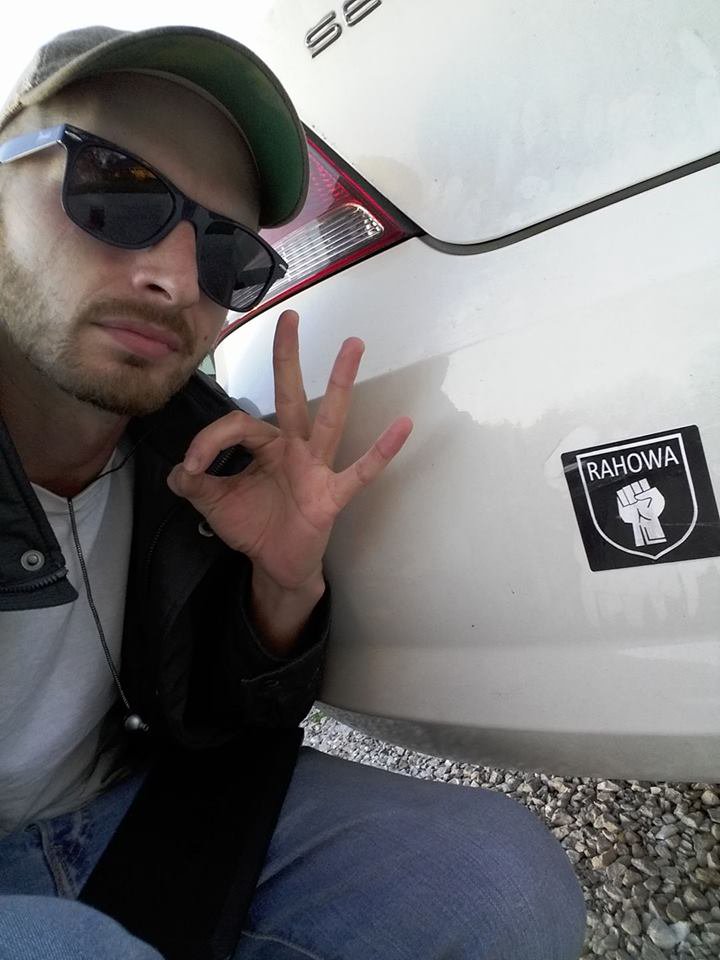 He also provided music for the right-wing podcast “Paranormies” as “Hudson Vandal.” 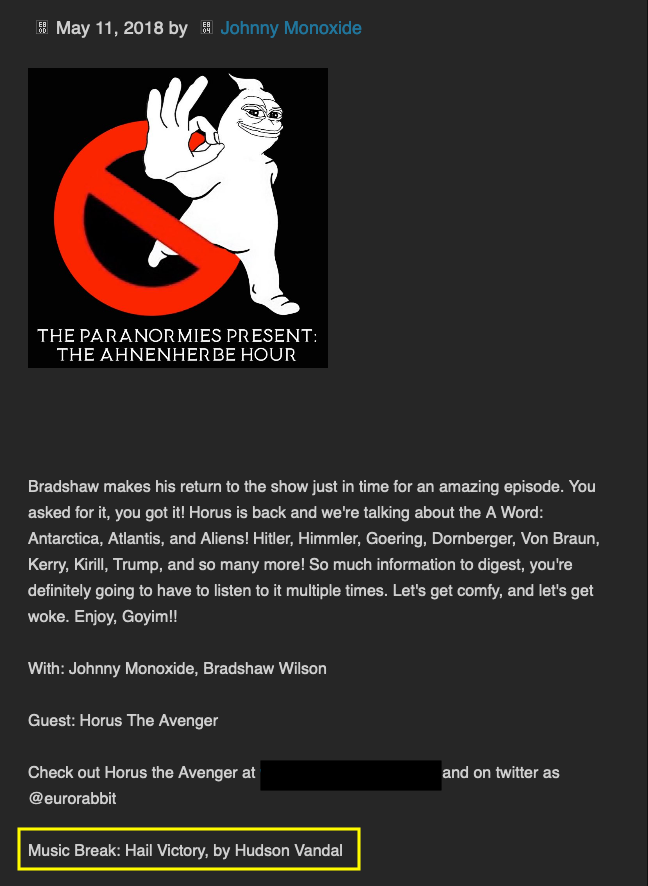 Could it be that “Swastika Pin” might have some musical talent or skills? We’ll have our answer later in this article.

Following the 2017 Charlottesville rally, “Swastika Pin” kept a low profile, perhaps fearful that he would be held accountable for his actions during the event. We found this Facebook profile in August of 2019. In this account, “Swastika Pin,” now going by the alias “Hudsen Zuccsby,” posted a photo of himself sporting a bowl-style haircut, an indication that he still was still a fan of the murderer Dylann Roof. This account was Facebook “friends” with an account used by James Michael Gallagher, indicating that they were still friends during this time. 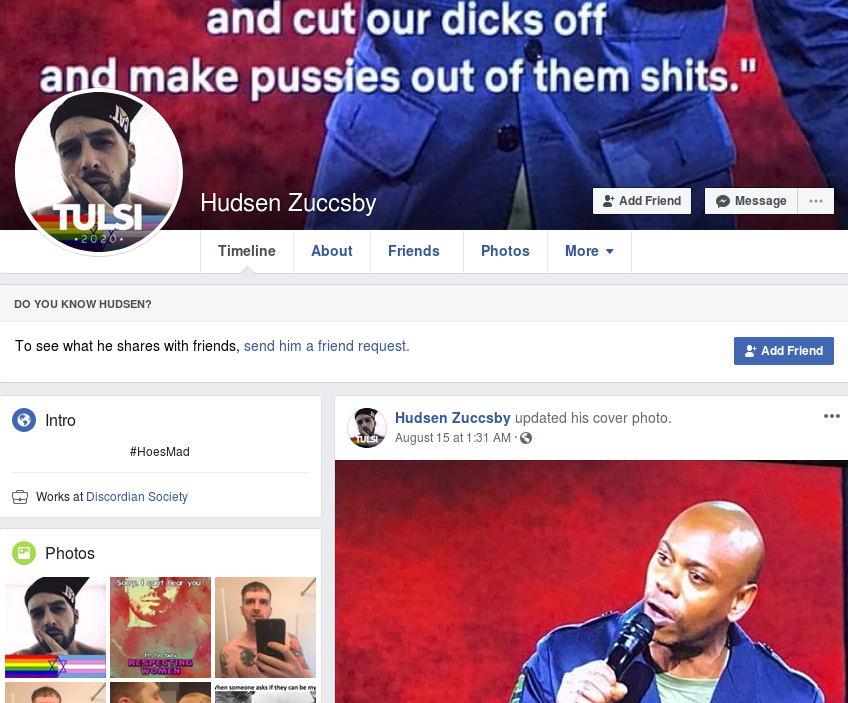 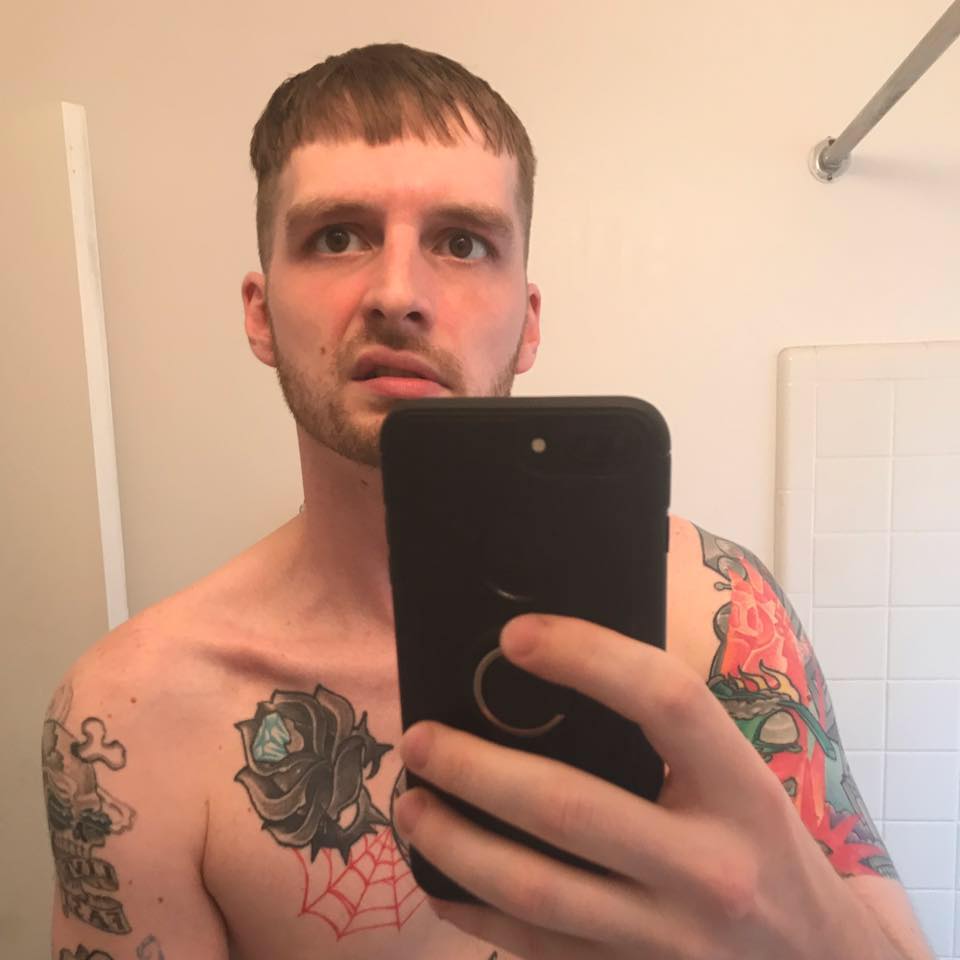 We could tell from his past behavior online that “Swastika Pin” was comfortable with using variations of familiar user names across his social media accounts. One social media account, however, proved to be especially fateful for this neo-Nazi-in-hiding. “Swastika Pin” had an Instagram account under the name “hudsonacid“ (archive) on which he posted several images of himself and, aware of his user name preferences, we searched for variations of this user name, which led us to another Instagram account, one that would lead us to the eventual discovery of “Swastika Pin”‘s true identity.

From the information on this account we learned that “Swastika Pin” had relocated from his native Florida to Milwaukee, Wisconsin and had become a music DJ and composer of electronic dance music. Calling himself “Hdsn Acid,” our “Swastika Pin” had performed at a number of festivals and was garnering a following among EDM afficionados. In fact, some of his musical colleagues were persons of color and likely unaware of his violent racist past. It appeared that “Swastika Pin” was determined to appear to be anything other than the violent neo-Nazi that he was.

In August “Hdsn Acid” celebrated the release of a single entitled “Can U Hear Me Now?” on the music platform Soundcloud, as well as commercial internet music markets like iTunes and Spotify. He also announced a new EP album entitled “Libra” due for release on October 2, 2020 in the bio portion of his current Instagram page.

We now knew what “Swastika Pin” had been up to recently and we knew his location as well. What we did not know was his full legal name, but this was not far off.

Having a look at Spotify’s information on Hdsn Acid’s single provided us with the songwriting credits for this song: “Zachary Fisher.” Knowing he was likely from Florida we searched the state’s public records and found our man: Zachary Hudson Fisher of Winter Haven, Florida. 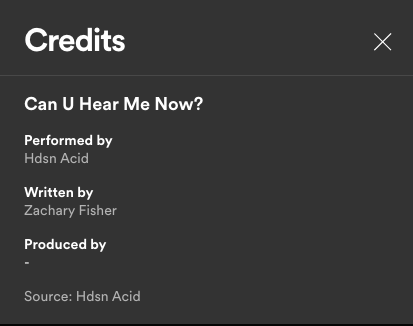 The violent neo-Nazi whom we have come to know as “Swastika Pin” was, in fact, Zachary Hudson Fisher, born October 2, 1989 from Winter Haven, Florida. We had postulated that “Swastika Pin” was astrologically a Libra, since he has a Libra tattoo on his stomach, and thought it possible that the release of his album, October 2, might be his birthday. Our findings confirmed that this analysis was correct. Furthermore, “Swastika Pin” followed his modus operandi of repurposing familiar names, in this case his middle name “Hudson.”

Looking back through his history on the internet we see that Fisher had experience in amateur music production and a few minor run-ins with the law.

How Zachary Hudson Fisher initially got involved in white supremacist movements is beyond the scope of this article, but we feel that in light of the violence he demonstrated at the “Unite the Right” rally, his hateful online rhetoric and the fact that he seems to think that he has escaped the consequences of his past actions leads us to believe that he is still a danger to our communities. 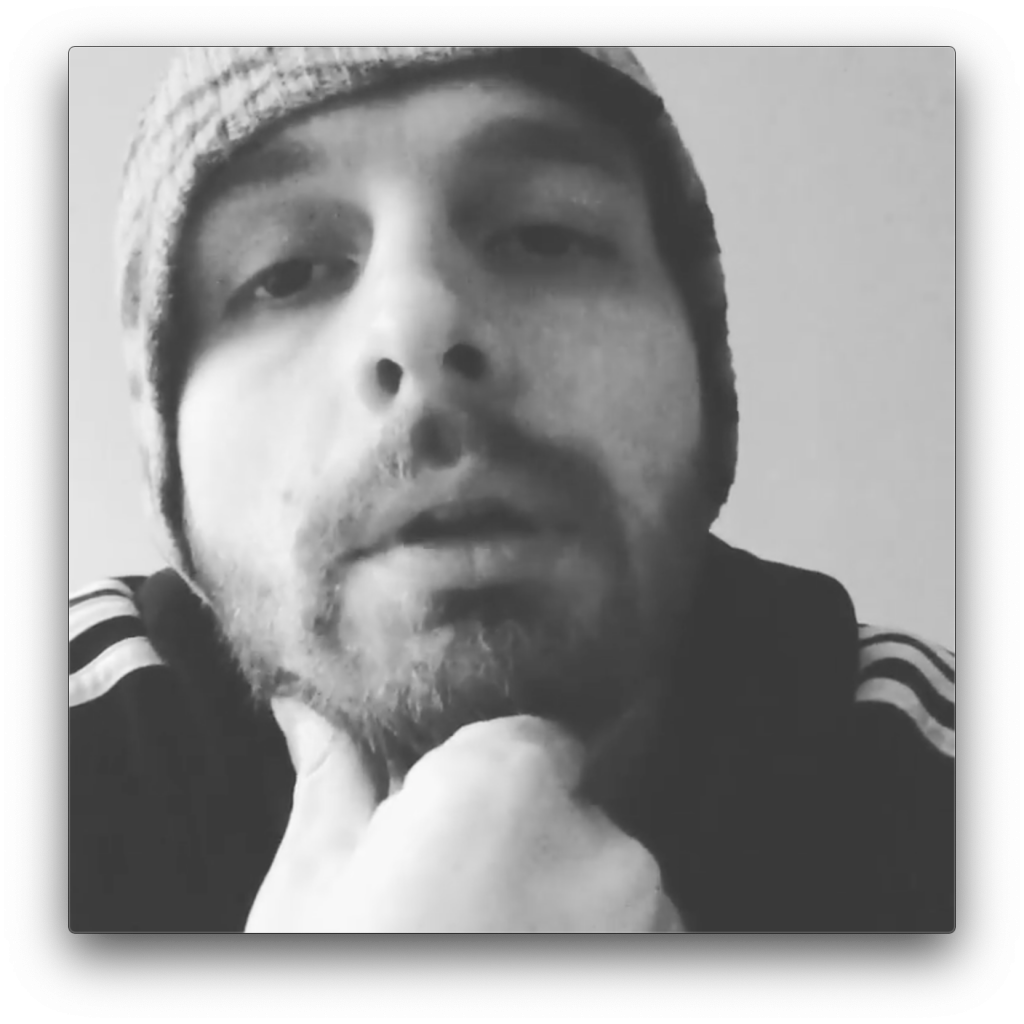 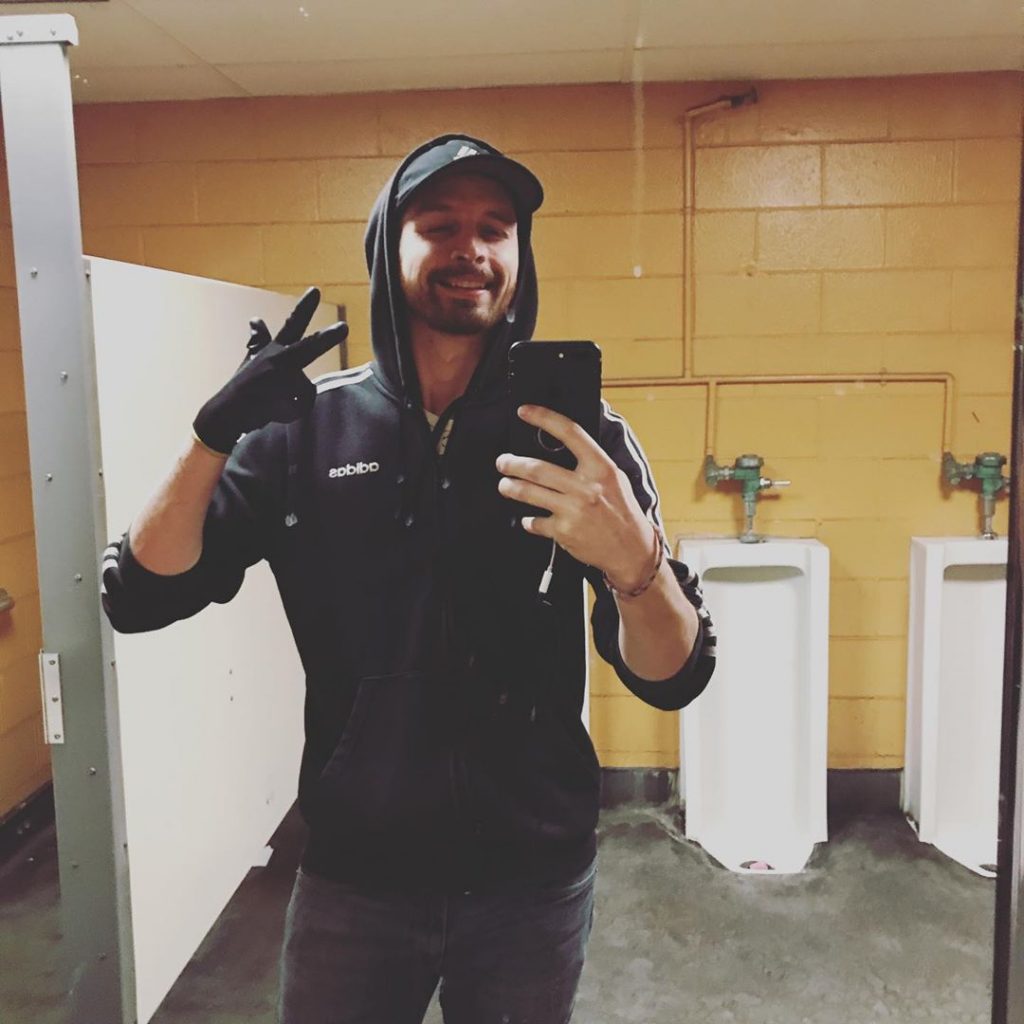 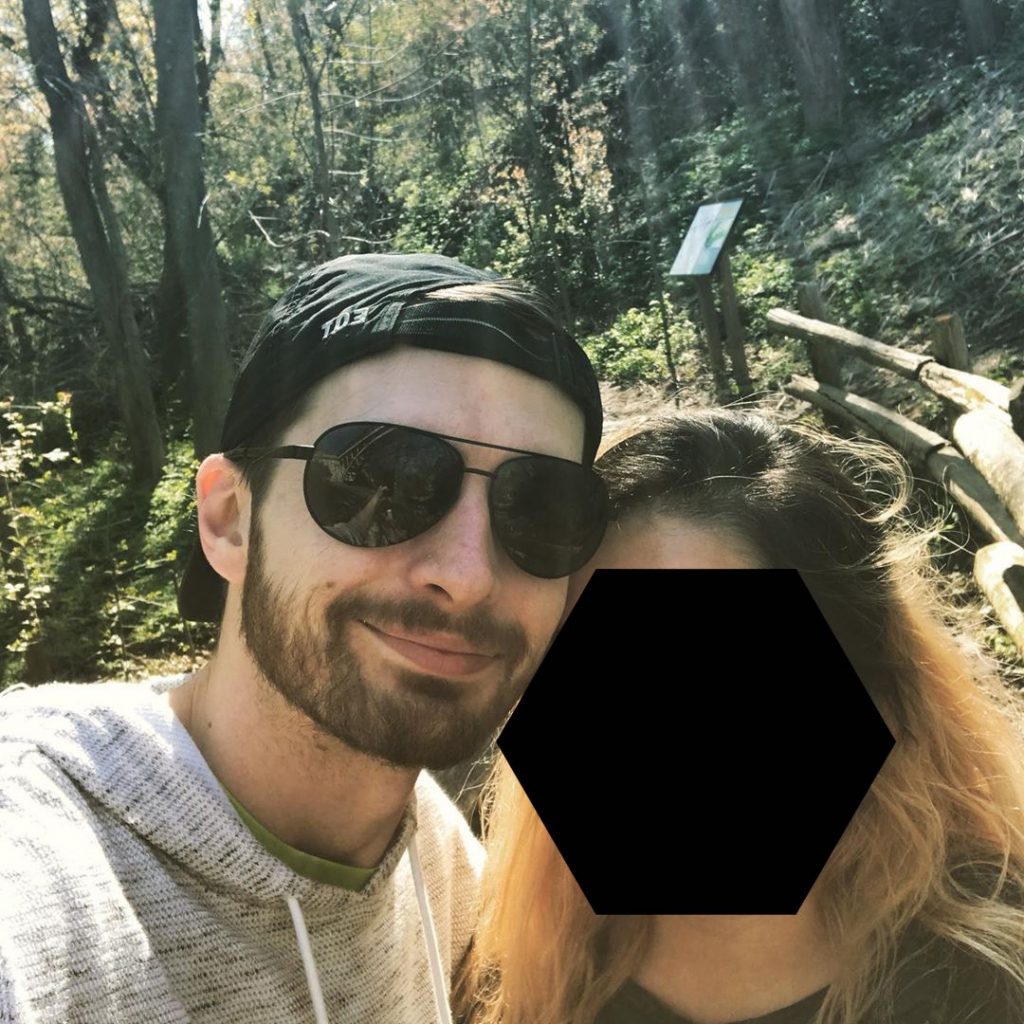 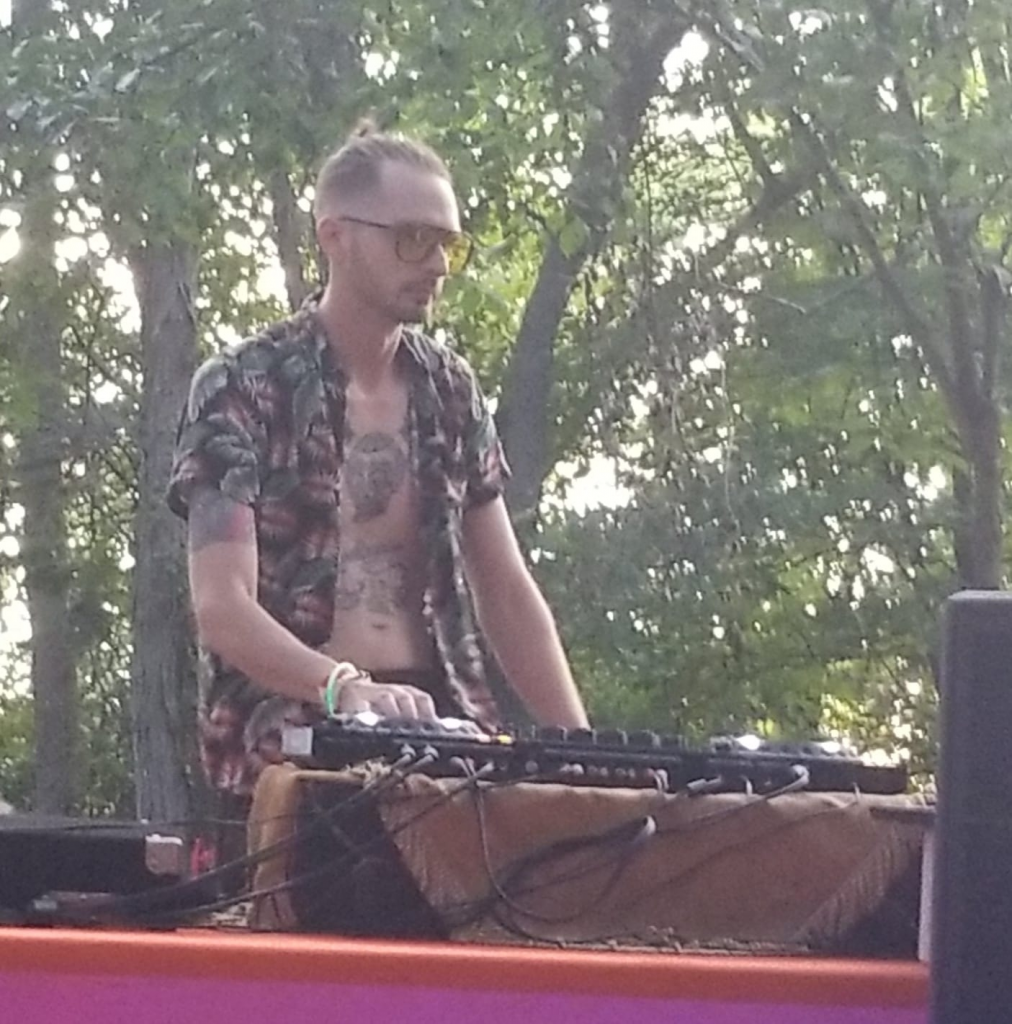 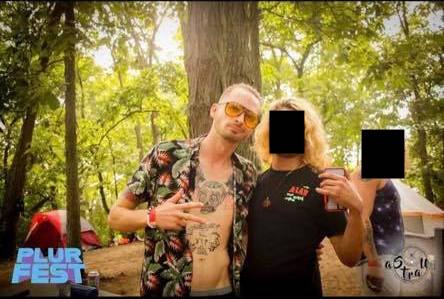 Many thanks to our friends @ Utah161 on Twitter and the many anonymous comrades who have contributed to this research either directly or indirectly.

Fisher has issued public statements on his Facebook page regarding our findings which may be found here [archive] and here [archive]. While we at the Anonymous Comrades Collective believe that everyone is valuable and has the ability to change for the better, we find Fisher’s statement to be insufficient given the level of violence he showed at the “Unite the Right” rally and considering how immersed he was in white supremacist movements.

For one, Fisher seems to be expecting instant redemption despite not putting in the work to show that he has changed. Secondly, Fisher is shifting blame, citing his drug abuse and claiming that he was a “victim” of violence at the rally, a rally that at which he and other white supremacists intended to instigate violence. Thirdly, he and his defenders have made claims that aspects of our research had been fabricated. This is untrue. To be clear, the only alterations of any photos in this article were 1) markup to point out the subject of the photo in context and 2) cropping and/or redactions to protect privacy.

Fisher cites some of the altered or “photoshopped” photos that include a “bowl cut” in them; these are altered photos and we believe we have sufficiently explained who did these and why in the article. He also claims the threats of violence are faked:

This is untrue. They are unaltered screenshots of statements he made on publicly visible social media.

Fisher’s significant other of “5 years” has been vocal in defending him (although her statements are public we will not identify her here). She has brought forth suspicion that some of Fisher’s social media accounts have been “faked.”

We are not aware of any fake Instagram or Soundcloud pages attributed to Fisher. All of the accounts cited in the article, to the best of our knowledge, belong to Zachary Hudson Fisher.

Again, we hope that Fisher will one day have the self-awareness to enable true personal growth, but it is evident by the response to his exposure that he is not willing to take full responsibility for himself. There indeed have been individuals who have made tremendous efforts to escape hateful ideologies. Fisher’s attempt to talk his way out of his past is an insult to those admirable individuals who have truly left the hate.