Last October our original Anonymous Comrade put the spotlight on a Bowl Patrol associate who goes by the alias “Mosin-Nagant“:

“Mosin-Nagant” was actually exposed earlier by fellow Nazi Christopher “Crying Nazi” Cantwell as retaliation for alleged harassment against him by the Bowl Patrol. He revealed that “Mosin-Nagant” is actually Dallas JN Medina of Ravenna, Ohio. At the time, Medina did not seem to0 disturbed by this exposure, as expressed in one of his now-suspended Twitter accounts:

In fact, in numerous public Telegram messenger chat posts he seemed more miffed that we didn’t present a more current photo of him in our tweet. 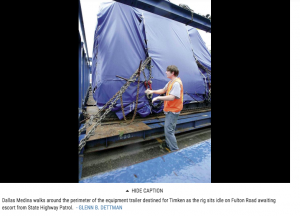 He will surely be interested to know that we have more current photos and news about him. But first, some background on Dallas “Mosin-Nagant” Medina.

Using the alias “Mosin-Nagant,” naming himself after an antiquated Russian bolt-action rifle, Dallas Medina was a frequent associate of the Bowl Patrol and appeared on several episodes of the “The Bowlcast,” the Bowl Patrol’s irregularly produced podcast.

Medina also frequently associated with the Bowl Patrol in Telegram messenger chats where he exchanged violent, racist rhetoric and memes with other Bowl Patrol members such as Andrew “Vic Mackey” Casarez, whom we exposed earlier.

Medina also played an instrumental role in the feud between Cantwell and the Bowl Patrol. It was he, together with a person named “Cassie” who was Cantwell’s call screener, who opened Cantwell’s radio show to phone pranks from the Bowl Patrol.

But before Medina involved himself with the Bowl Patrol, he had served in the US Army at Fort Drum, New York. It seems, however, that his experience in the military was not to his liking, as indicated in this public Telegram messenger chat post: 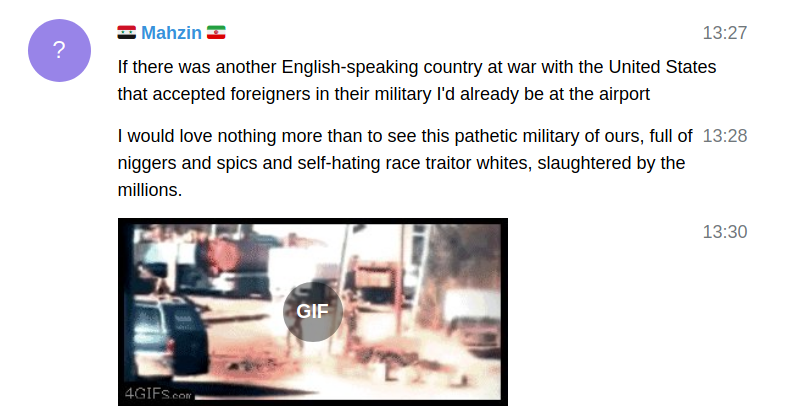 After his discharge in 2015 Medina was active in white supremacist movements, as he expresses in in leaked Discord chats collected by Unicorn Riot. …

…and in public Telegram messenger chats.

The “Ted” he refers to in the above screen shot is Missouri neo-Nazi Ted Von Nukem (name legally changed from Ted Landrum), who was exposed following his appearance at the Charlottesville “Unite the Right” rally in 2017.

Dallas “Mosin-Nagant” Medina was also present at that rally, as he notes here in a Discord chat: 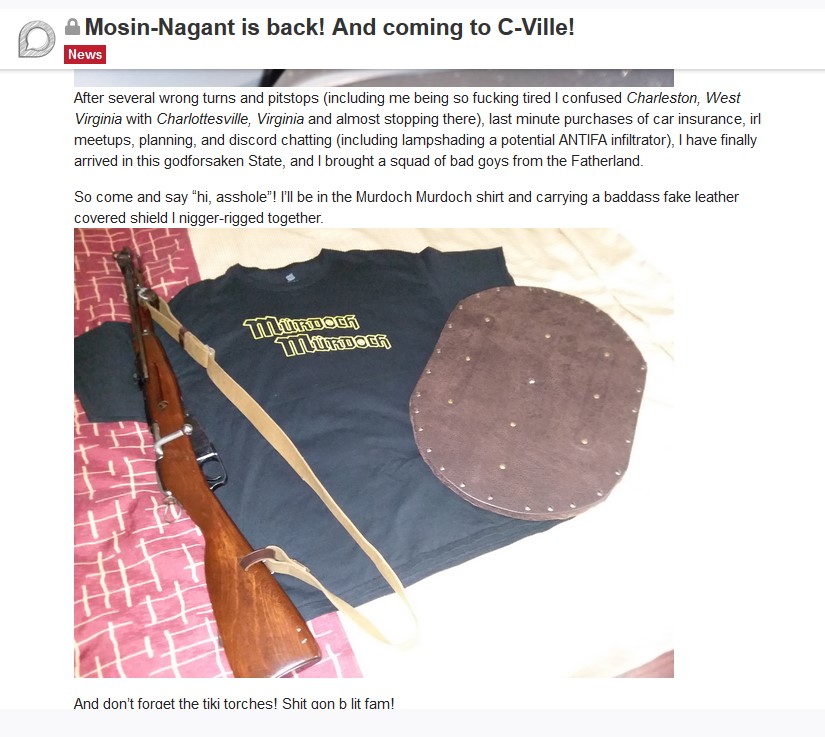 Images from the event proved this to be true. 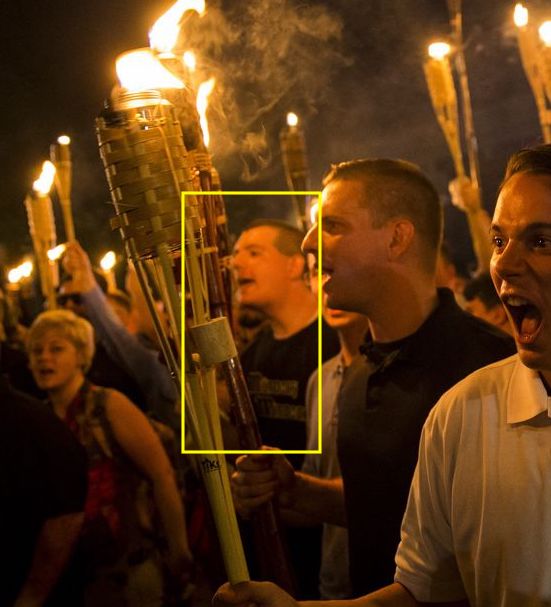 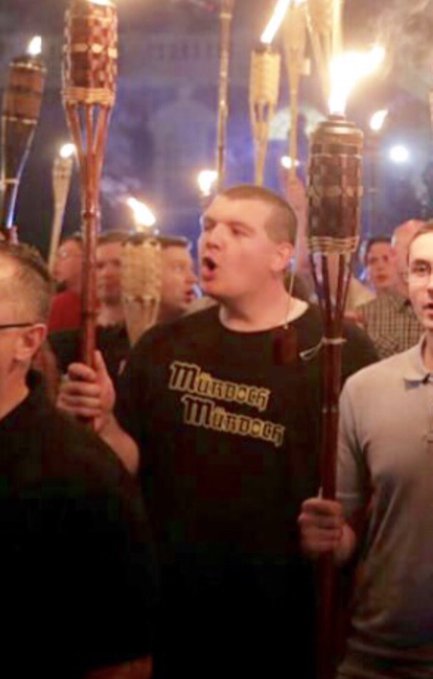 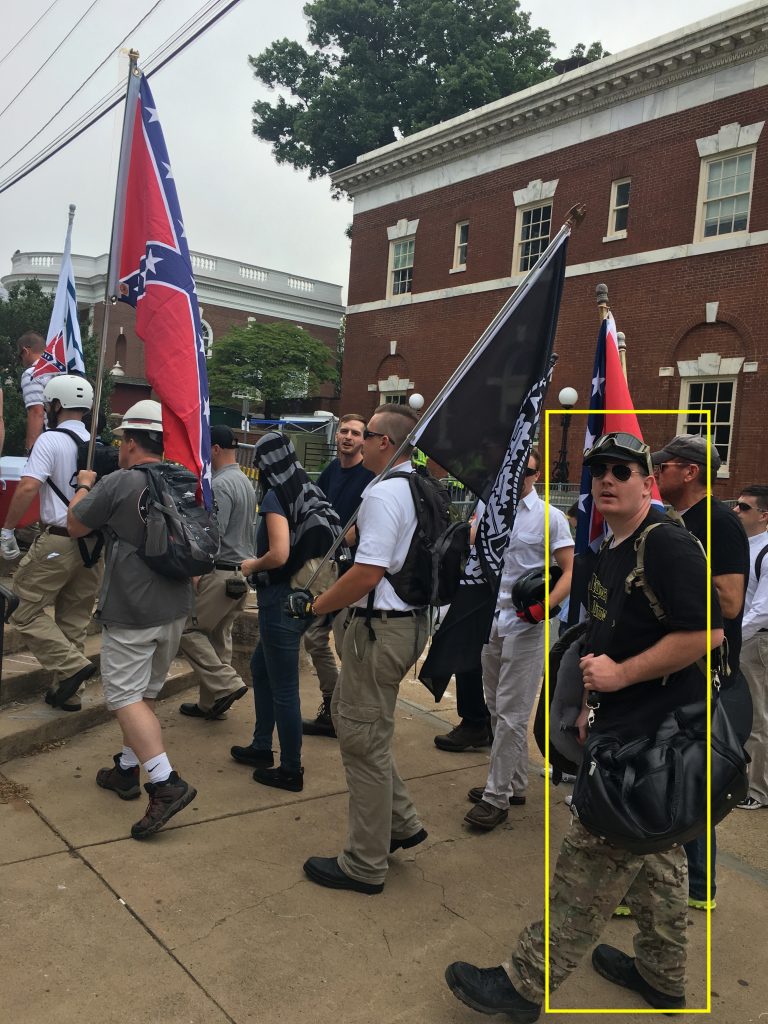 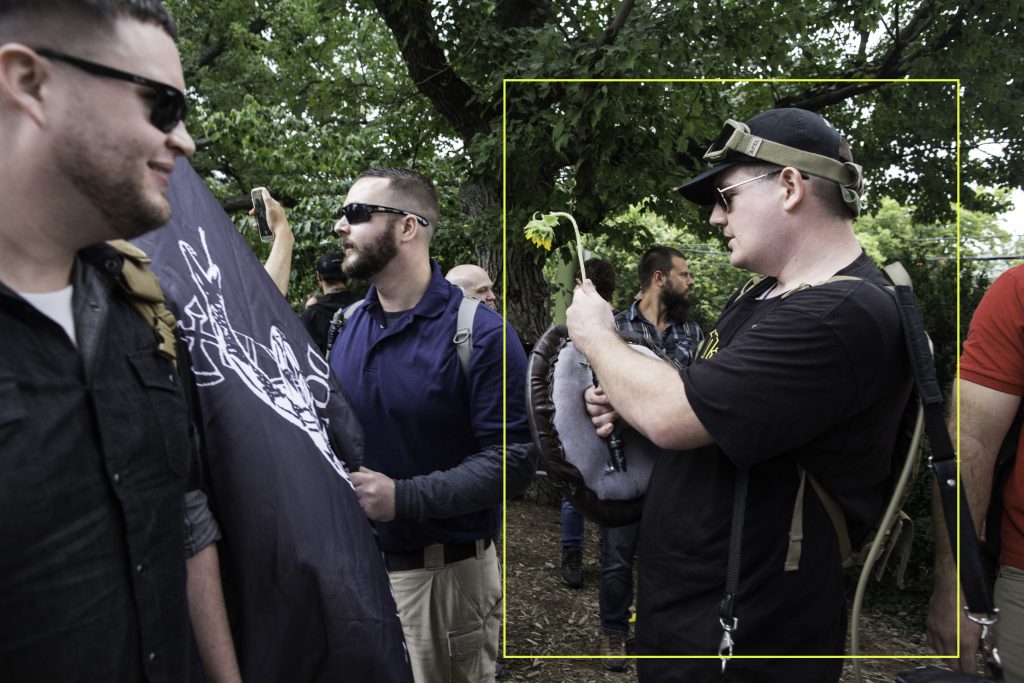 We can also find Medina in the Vice News segment “Race and Terror” standing behind his then-hero Christopher Cantwell. 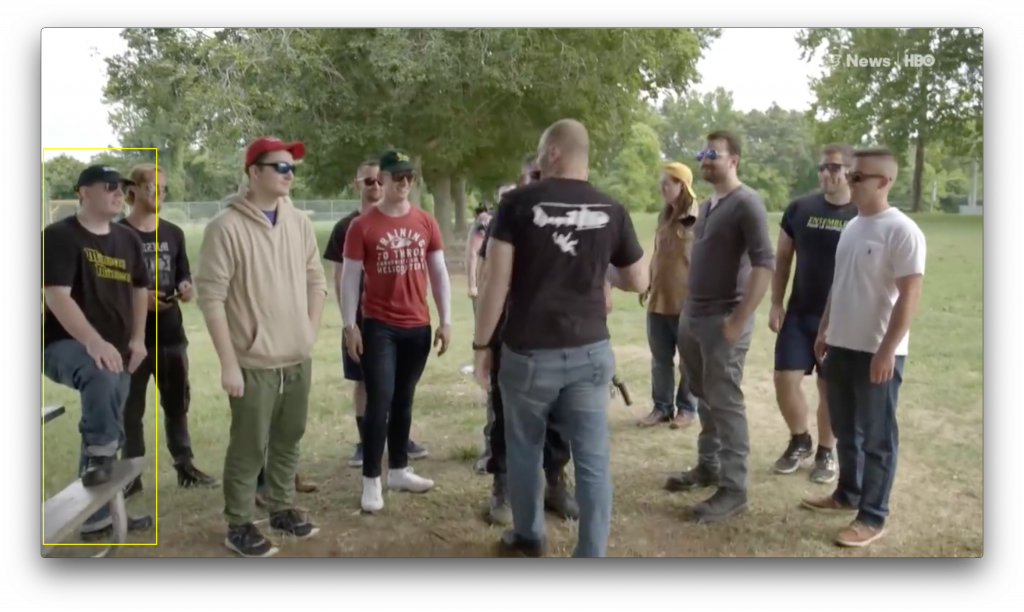 He seems to be proud of his participation in the event as we see here in an argument with fellow racist Louis Jeffery Giovingo, aka “Southern Dingo” on Telegram messenger where he calls himself a “veteran” of Charlottesville. 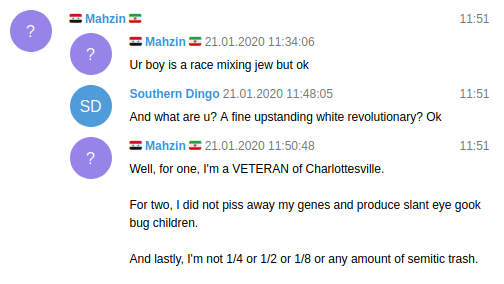 “Hitler would be proud of me.”

More recently, Medina has been working as a line-clearance arborist, clearing trees and foliage from electrical lines in his native Ravenna, Ohio area of Portage County, as he explains in public Telegram messenger chats. 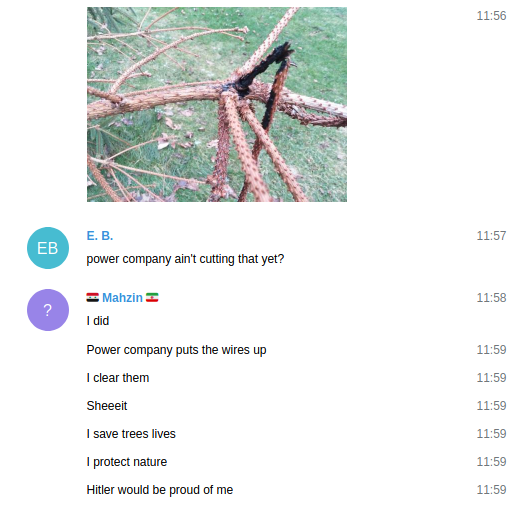 Despite the fact that Dallas Medina seems to enjoy his job, other statements he makes leads us to believe that he is a danger to our communities and the public should be aware of his presence.

Medina also seems fixated on spreading violent and gory real-life execution and murder videos, which gives us a disturbing glimpse into his mentality.

It could also be argued that he is a danger to himself and others around him. Here he demonstrates his irresponsibility regarding firearms as he points a loaded handgun at his groin.

On another occasion he posted a video of himself and another unknown person firing a pistol into a body armor panel in the basement of his residence.

Overall, Medina indicates that he is disillusioned in white supremacist movements as a whole, but is still willing to engage in violence.

Dallas JN Medina (d.o.b. 4/19/1992) of the Ravenna, Ohio area has a long history of violent racist rhetoric and, as evident by his participation in the racist 2017 Charlottesville rally, has demonstrated a propensity for physical violence. Although the activities of his long-time compatriots in the Bowl Patrol have been greatly disrupted by the exposure of their leader Andrew “Vic Mackey” Casarez, Dallas Medina’s racism and violent fantasies continue. Therefore we feel he is still a danger to our communities.

Special thanks to our friends @ utah161 on Twitter for their contributions to this report.