Leave it to the alt-right to besmirch something as classic as the The Mamas and the Papas. In contrast to the acclaimed American folk band, “The Mamas and the Pepes” has been making racist music distributed by the “White Art Collective” since 2017, with titles such as “Anchor Baby,” “Pride and Privilege” and “Fake American.”

Thanks to the recent breach of Nazi-friendly domain registrar Epik.com by the hacktivist collective Anonymous, we were able to track down the identity of the front person and lead singer of “The Mamas and the Pepes” who calls herself “Mama P.” Since the hack by Anonymous was in response to Epik.com hosting an anti-choice website, what we discovered in our investigation was surprisingly topical.

“The Mamas and the Pepes”

“The Mamas and the Pepes,” named as a spoof mash-up of the American band “The Mamas and the Papas” and the alt-right mascot “Pepe the Frog,” has been creating music with racist, homophobic, transphobic, antisemitic, Islamophobic and fascist themes since 2017 . Fronted by “Mama P” with “The Handsome Horse” on guitar, the duo has produced such songs as “Hate Crime Hoax”:

and “You Gotta Go Back”:

You gotta go back where you came from
You don’t like us
You just like our stuff
We gave some to you, but it’s never enough.
So let’s coexist
With you OVER THERE
Over the wall, out of our hair
[archive]

I took a trip back to my old hometown
and lo and behold – the children are brown!
I’m wonderin’ where all the white people went
This is the goal of the GREAT REPLACEMENT
[archive]

Neither members of the duo show their real faces publicly, with “Mama P” using a literal sock puppet for her online appearances on neo-Nazi podcasts.

“The Mamas and the Pepes” are closely affiliated with the White Art Collective (WAC), a group of musicians and visual artists who promote white supremacist themes and other right-wing beliefs. “Mama P” conducts many interviews with other alt-right personalities (and even one of themselves) for their website and also hosts a music show on the WAC’s DLive channel.

One of the interviews “Mama P” conducted was with the Global Minority Initiative (GMI), a group that seeks to provide legal, financial and moral support for whom they call “political prisoners” (ie. neo-Nazis and other white supremacists who are incarcerated). She ends the interview with:

So please, whatever your belief system, taking care of our guys matters. It matters to me, and it should matter to you, too.

While there is much to criticize about the prison industry, by “our guys” “Mama P” means the white supremacists who are incarcerated for committing violence upon non-white persons and other minorities. “The Mamas and the Pepes” even did a promotional piece for the GMI in which you can hear their speaking voices:

“The Mamas and the Pepes” also have a Gab account operated by “Mama P” on which they promote their material and post racist and LGBT-phobic messages, as well as anti-vaccination messages.

They may not have known at the time but “The Mamas and the Pepes” was quickly attracting some unwanted attention by some nosy antifascists (us).

On September 13, 2021 the hacktivist collective Anonymous announced that they had breached the systems of Epik.com, a domain name registrar known for catering to extreme right-wing customers, in response to their hosting of an anti-choice website and would allow access to this information. The info dump proved to be a treasure trove for researchers and provided what we needed to track down “Mama P.”

The official website for “The Mamas and the Pepes” was registered through Epik.com and the registrant’s information was present in this info dump, as shown below. (We have redacted some details, although this information is now publicly available):

A password used by “mamaspepes.com” and stored in plain text by Epik.com was an appreciative nod to violent right-wing extremist “Based Stickman” Kyle Chapman.

While this was a tremendous lead, by itself it was not enough, especially considering that some of the customer data in the Epik breach was deliberately falsified by customers who wished to avoid identification, so further scrutiny was necessary. A quick search of public records indicated that a “Julie S Green” was indeed a real person residing at the registered address, but we needed more proof to ensure that this was the person behind the account. A search of popular social media sites was not fruitful with such a common name. What we did have, however, was an email address: in****@gmail.com.

Upon researching this email we learned that it was also present in another information breach, that of the blogging website Livejournal. While this particular blog had been deleted, the username found in this data set was an important clue: “jewelsgreen.”

We located another now-deleted blog on an archive site belonging to a person calling herself “Jewels Green.” One of the images displayed on a blog post was also an image used on the Google profile for the in****@gmail.com  email address, though its orientation had been rotated by 90 degrees.

While this was simply a stock photo, we found no other instances of this particular cropping elsewhere on the internet. We also found a website, The Burgenland Bunch, in which she is listed with a surname “Sem” and the in****@gmail.com email address is linked. In this case, that email was publicly attached to “Julie Shana Sem” of New York, New York, born in Allentown, Pennsylvania. Altogether, these were very strong indicators that we had found the person we were looking for. Further research made this indisputable. “Jewels Green” was very active in anti-choice circles regarding abortion for a period of time between 2011 and 2017. She claimed to have had an abortion as a teen and to have worked at an abortion clinic, but came to regret her past. As such, there are numerous videos on the internet of her speaking appearances. We were able to compare her voice on these videos of her speaking appearances with the voice of “Mama P” found on the many examples of her speaking and singing. One of them may be found here, on her own YouTube channel.

If that video happens to disappear, other examples exist:

We have these videos archived locally in case they are removed.

We compared Jewels Green’s speaking voice with the speaking voice of “Mama P” on her various white-supremacist podcast appearances such as one called “The After Party,” a short clip of which may be viewed and listened to below.

We concluded that the voices were undeniably the same; Julie Shana Green, of Wallingford, Pennsylvania, aka “Jewels Green” was the person behind the voice and (literal) sock puppet of “Mama P” of “The Mamas and the Pepes.”

From Anti-Choice to White Supremacy

With the knowledge that “Mama P” was in fact anti-choice activist “Jewels Green,” much of the Twitter activity of “The Mamas and the Pepes” Twitter account (@MamasPepes) made clear sense, showing very specific knowledge of anti-choice talking points.

At some point Julie “Jewels” Green went from conservative anti-choice activist to full on fascist, as demonstrated by this awful parody of a Partridge Family song:

Julie Shana Green was born on August 26, 1971 and claimed to have been “a 17-year-old drug-using high school drop-out” who was forced into an abortion by her then-boyfriend. She then claimed to have “worked at an abortion clinic for five years (from age 18 to 23)” and claimed to have been a pro-choice activist during this time. She graduated from Kutztown University in 1995 (under her surname previous to her marriage to Green, “Sem”) and then claimed that she quit working at the abortion clinic and became an anti-choice (so-called “pro-life)” activist.

Around 2000 Green got married and converted from her Lutheran faith to Catholicism, the faith of her husband, a prominent Wilmington, Delaware lawyer.

We can only speculate why such a notable anti-choice speaker who claimed to have converted from a pro-choice stance and who claimed to have had an abortion herself in the past left the scene so suddenly and thoroughly, but the slide from anti-choice into full-blown white nationalism is unsurprising. The crossover of racism and xenophobia into anti-choice circles is a well documented one. As Alex DiBranco, writing for The Nation, notes:

In recent decades, the movement mainstream has been careful to protect its public image by distancing itself from overt white nationalists in its ranks. Last year, anti-abortion leader Kristen Hatten was ousted from her position as vice president of the anti-choice group New Wave Feminists after identifying as an “ethnonationalist” and sharing white supremacist alt-right content. In 2018, when neo-Nazis from the Traditionalist Worker Party (TWP) sought to join the local March for Life rally organized by Tennessee Right to Life, the anti-abortion organization rejected TWP’s involvement.

The mention of Kristen Hatten is interesting since we found that Green (perhaps unsurprisingly) seemed to be a close associate of Hatten, as evident by their appearances together at anti-choice events.

Green also associated with several other extreme right-wing Twitter accounts, such as Ashley Rae Goldenberg (aka “@Communism_Kills) who is known to associate with white supremacists and Robert Spencer, operator of the Islamophobic website “Jihad Watch,” as evident by archived Twitter posts.

In 2017 the white-nationalist folk musicians “The Mamas and the Pepes” appeared, with presences on Gab and other right-wing-centric internet platforms. While having strong opinions about abortion is one thing, Green obviously feels that her racist, white nationalist views are more dangerous to her social standing since she has only appeared from behind a cheaply made sock puppet. She has expressed on various racist podcasts that she cannot show her face. Apparently, she would much rather express her racist views with poorly written jingles and cheap cotton socks.

While we don’t know what made Julie “Jewels” Green disappear from the anti-choice activism scene to become a white nationalist folk singer who hides behind a sock puppet, we do know that she can put those socks back on her feet because she can’t hide behind them anymore.

A big shout-out goes to Anonymous, whom we are not affiliated with in any way, despite our name.  Thank you for your service! 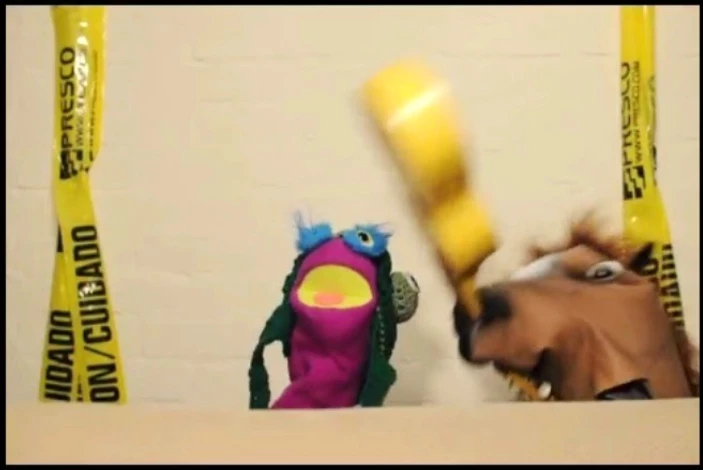