On January 6, 2021 Americans watched, aghast, as pro-Trump insurrectionists invaded the US Capitol Building in Washington, DC. The Washington Post wrote, “A day for ceremony descends into anarchy on Capitol Hill.” But the Post got it wrong: it wasn’t anarchy at play; it was fascism, spurred on by supporters of the ocher-hued wanna-be dictator Donald Trump.

One case in point is Joseph Brody, who was recently indicted on multiple federal felony charges for his actions at the Capitol on January 6. Not only was Brody a fervent Trump supporter, but an examination of Brody’s social media history shows that he was also a neo-Nazi and violent misogynist who conceptualised rape as a weapon.

Recently, five members of the racist “Groyper” movement were identified and charged with multiple federal criminal offences for their actions at the Capitol on January 6: Paul Lovley, Jon Lizak, Gabriel Chase, Thomas Carey and Joseph Brody. All five of these guys are in deep trouble, but Joseph Brody will likely do hard time under statutes covering those who “forcibly assault, resist, oppose, impede, intimidate, or interfere with any United States law enforcement officer.” While many in the GOP sought to minimise the actions of the insurrectionists, with one Republican congressperson even going so far as to compare the incident to a “normal tourist visit,” those of us who are not complete idiots know that the crowd was chock-full of neo-Nazis, white supremacists and legit fascists. Joseph Brody was one of them, as is made clear by an examination of his online behavior.

Joseph Paul Brody, 23, of Springfield, Virginia, who often goes by “Broseph” online, was known as “suit guy” by open source researchers before he was identified. The grey suit and striped tie he wore to the insurrection made him easy to spot in video and photographic imagery.

Although he’s infamous for being a Capitol insurrectionist, he has a prior internet history of racism and violent misogyny that, until now, had not been uncovered. Joe Brody is very online and has been posting racist, antisemitic, and misogynistic content since he was a teenager.

In 2019, Brody was posting on Twitter as “Proud White Male” @TheVARight and “Cathbro” @TridentineBro. His self-description on Twitter included “Generation Zyklon Z” and “Woman Hater.” Many of Brody’s online posts featured a twisted mix of devout Catholicism and toxic hate. While much of this has been deleted from social media platforms for violating their terms of service, some of it may still be found at archive.org.

Joseph Brody identifies as a devout Catholic, posting frequently on religious matters, and at one point claimed he would be attending divinity school. He attends Mass at St. Lawrence Catholic Church in Alexandria, Virginia.

Joseph Brody eventually fell in with Nicholas Fuentes’ America First movement and became a hardcore Groyper. In the Nick Fuentes server on Discord there are more than 7000 posts under Brody’s “Brosef” screen name.  As the America First movement increasingly reveals itself to be a bizarre, cult-like movement with a mercurial leader in Nick Fuentes, potential new followers would be well served to research the deeply messy defections of former insiders, complete with truly weird allegations of Nick Fuentes conducting black-light semen inspections and doxxing former associates, and generally bizarre behavior and treachery on all sides.

Brody was very much an insider in the America First movement, but apparently fell out with Fuentes sometime after the January 6th debacle. When the five above-named J6 participants were identified as Groypers, Fuentes went scorched-earth, variously describing them as “losers,” “Jewish,” “vaccinated,” and of course “not Groypers.” After insisting that “we don’t dox people,” he then doxed Joseph Brody by linking him to the “Broseph” Twitter accounts.

He also called him a “wignat,” a pejorative for a particular sub-genre of national socialist. It’s gotta hurt when a neo-Nazi low-life like Fuentes thinks you are an even lower breed of Nazi.

The slapfight got very personal, with Fuentes accusing Brody of sticking a knife in his back; he also accused Brody of calling in a bomb threat to the AFPAC III conference, which is a felony last time we checked.

In spite of Nicholas Fuentes’ protestations to the contrary, Joseph Brody was indeed a Groyper. He participated in many, many America First/Groyper events, including AFPAC, the “Million MAGA March” in DC, and “Stop the Steal” at Harrisburg, PA in 2020; and the “Men’s March” at DC, an anti-vax rally at Springfield, IL, and an anti-vax rally in New York City in 2021.

In fact, Brody was such an integral part of the Groyper scene that he was invited to the wedding of fellow Groyper and America First organisation techie Simon Dickerman, wearing what appears to be the same suit that he wore at the J6 insurrection. Also notable was the presence at the wedding of another fellow Groyper, Ryan Slingerland, aka “Sharia Leboeuf.” 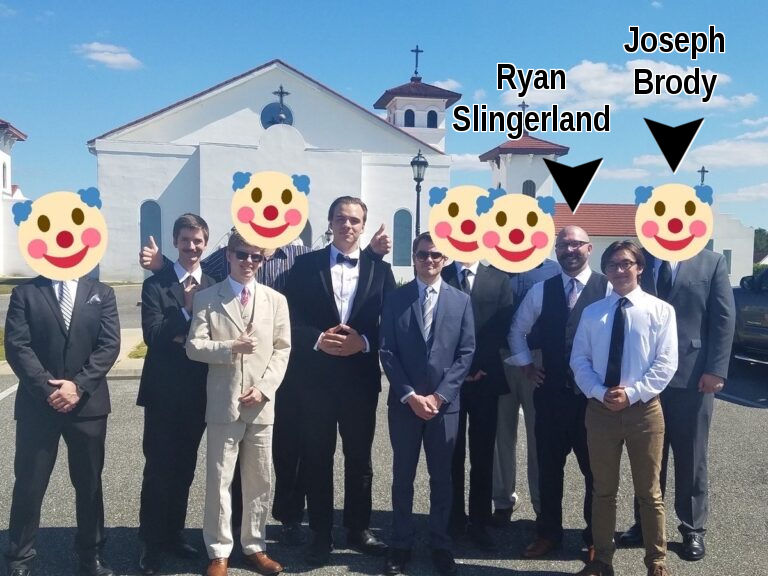 The America First/Groyper movement is extremely antisemitic and racist but also very conscious of “optics.” On Discord, Brody was critical of most other white nationalists, Nazis, and “wignats,” particularly political candidates like Patrick Little and Paul Nehlen. He fretted that overt Nazism would repel traditional Republican voters, particularly the baby boomers. But despite Brody’s attempts to put a respectable spin on his fascist beliefs, he can frequently be found enthusing about Nazi culture and fascism.

In this line of work one sometimes becomes desensitised to bigoted content, but Joseph Brody’s creepy sexual weirdness and expressed violent misogyny is some of the more alarming stuff we have come across. Brody self-identifies as “volcel,” (voluntarily celibate), but he is also a staunch defender of the so-called “incel” or “involuntary celibate” community, declaring them the result of “this Godless society” and “products of the degeneracy we have been thrust into.” In an alarming series of posts, Brody references misogynist mass murderer and incel Elliot Rodger and declares, “the eternal woman is the true evil,” blaming women for the existence of incels. Brody then issues this chilling prediction and sociopathic rationalisation: “I expect many more acts like Rodger in the future, and if the victims be women, I have no quarrels.”

In another Discord thread, Joe Brody responds to a woman joining the chat with unhinged misogynistic insults, threats of rape, and sexual demands.

Brody didn’t confine his hatred of women to private Discord chats; he also frequently posted threats of rape on Twitter. (We’re not linking to the archived tweets for some of these because the tweets are abhorrent and the victims don’t need the grief.) He frequently referred to himself as a rapist in his Twitter handles.

The picture below was tweeted by Brody on the occasion of Simon Dickerman’s wedding, mentioned earlier in this piece. The bride had been groomed as a high school student and had just turned legal. Brody’s congratulatory tweet to the couple read, “You may now r*ape the bride.” 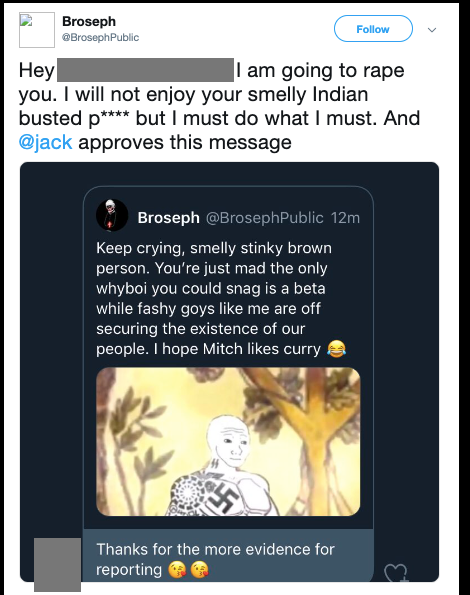 The far right is currently obsessed with the notion of pedophiles grooming children for sexual abuse, but Groyper sex pest Joseph Paul Brody seems equally obsessed with underage girls himself, and has written numerous sexually explicit posts on the subject. He once wrote on Discord, “I want a girl built like she[sic] 12 so I can physically break every bone in her body.”

His Mom is  a Right-Wing Whackjob, Too

Joseph Brody lives at home and posts frequently about his extremely conservative “red pilled” mother. It shouldn’t surprise anyone that a “wignat” might be spawned by a wingnut, but Joe Brody’s mom, Maureen Latimer Brody, is a real piece of work. Maureen Brody is very involved in Republican politics in Virginia and recently lost a race as the Republican candidate for the Virginia House of Delegates in District 39. As an early adopter of antisemitic social media site Gab, she has been posting absolute batshit material since 2017. Maureen Brody traffics in some of the looniest conspiracy theories from David Icke, Alex Jones, the John Birch Society, and various Q Anon accounts. She also routinely interacts with incontrovertibly racist accounts like Vdare and Red Elephants, and promotes violent hate groups like the Proud Boys.

Maureen Brody’s political goals are to eliminate the separation of church and state, which she claims is a heresy. Her goal of “Restoring All Things in Christ in the commonwealth” is a fanatical attempt to impose religious governance over all political and social life. She has also been involved in various “stop the steal”-related initiatives and was, along with her son, an attendee of the violent storming of the Capitol on January 6, 2021. While it does not appear that Maureen Brody entered the Capitol Building, she was heavily involved in promoting the event and organising regional transportation.

But extremist dipshit Maureen Brody is capable of even kookier beliefs with her posts about “transhumans,” “Baphomet’s tattoos,” and numerological nonsense. Oh, let’s not forget … sprinkling “exorcism salt” on your loved ones.

The fascist apple didn’t fall far from the extremist tree. Joseph Brody occasionally posts stuff on social media about the sentiments that he and his mom share.

Maureen Brody even set up her son Joseph in a paid position on the campaign of Virginia Governor Glen Youngkin. The lines between hateful extremism and mainstream Republicans have faded out, and the fact that white nationalist and rape enthusiast Joseph Brody was given an official GOP email address with which to conduct business makes this shockingly apparent.

While Joseph Paul Brody may seem an extreme example of the insurrectionists that invaded the US Capitol Building on January 6, 2021 in an attempt to disrupt the American political process, he is by no means a unique example. The crowd that day was filled with fascists, neo-Nazis, white supremacists and others who espouse racist, antisemitic, xenophobic and anti-LGBTQ+ rhetoric. Make no mistake: what happened on January 6, 2021 wasn’t anarchy, but fascism, and Joseph Brody was one of the fascists.