Today’s Pride Month Poa.st User Profile is a textbook closet Nazi who is hiding even darker secrets. Meet 35-year-old Nathan Davies aka “g117ch” from Moscow, Tennessee. Although he’s a relatively new user of Poa.st, having joined in March 2022, he has become very active and frequently kisses up to Poa.st owner and creator Daniel “Anime Graf Mays” Stevens, whom we exposed in an earlier installment.

In case you missed it, June is Pride Month, and in support of our LGBTQ+ comrades we are exposing various users of Poa.st, since the owner Dan Stevens proclaimed that “poast is participating by not having pride logos, forcing homosexual mental illnesses on its users or otherwise subverting the nuclear family.”

So how do we know Nathan Davies is “g117ch?” For one, he uses the username “g117ch” (presumably leetspeak for “glitch”) in a number of places online in connection with his real name, including a Fediverse instance that he runs, libre-chat.com, which is noted on his Poa.st profile. Looking up this Fediverse instance on Fedidb.org, a Fediverse directory, we can see the email for this instance’s admin is "nradavies@g____.com"(redacted).

And “g117ch” is a huge fan of the role-playing game “Dungeons & Dragons,” which he has written about on Poa.st. He posted a photo of his extensive Dungeons & Dragons book collection. It’s no coincidence that Nathan Davies is a fan, too– because they are the same person! In a photo on Davies’ personal blog he can be seen wearing a Dungeons & Dragons t-shirt and he wrote about playing the game in his blog as well.

And even though it has been deleted, Nathan Davies advertised on his Twitter account that he had a Twitch channel on which he streamed video game play using the name “G117CH.”

Nathan Davies, aka “g117ch” may not be the most overtly obnoxious neo-Nazi dirtbag on Poa.st, posting mostly about tech and gaming matters, but he falls in line with Poa.st’s culture, boosting content by familiar Nazi names like the National Justice Party. In one post Davies as “g117ch” posted a link to what he characterized as “useful resources.” Inside the folder was a large collection of racist, antisemitic, anti-LGBTQ, Holocaust denial and Nazi propaganda.

This would seem to run counter to his public persona throughout his extensive online footprint. This dude is very online! Publicly he postures as a centrist or moderate, stating that he “stands with Israel” on his Facebook page and blogging as “Nathan in the Middle” on his personal blog. He offered this pablum as his political philosophy: “It is time we got together, looked at the facts, and demand meaningful, workable compromise. Neither political extreme is workable for our country…” But while he does this, he also posts pro-Nazi, racist, antisemitic and anti-LGBTQ+ garbage on Poa.st.

So why are we singling out Nathan Davies for this scrutiny? There are three reasons: The first is that he is a Nazi bigot and big or small, we expose them all. Exposing neo-Nazis is ethical and necessary to defend our communities. The second reason we are putting Nathan “g117ch” Davies on blast is that he described himself as a “software engineer and general IT technician, sometimes referred to as a computer wizard” with the worst operational security we have ever seen. Davies repeatedly boasted about the six figure income he brings in despite his apparent utter lack of competence.

But the third and key reason is this really gross and misogynistic post where Nathan Davies proclaimed: “Men age like fine wine, and women age like milk.” This statement explained a lot about what we found next.

Davies might want to keep his mouth shut about his preference for underage women considering he just completed an eight-year bid in prison for aggravated statutory rape and sexual exploitation of a minor! He is listed as an active sex offender on the Tennessee Sex Offender Registry. 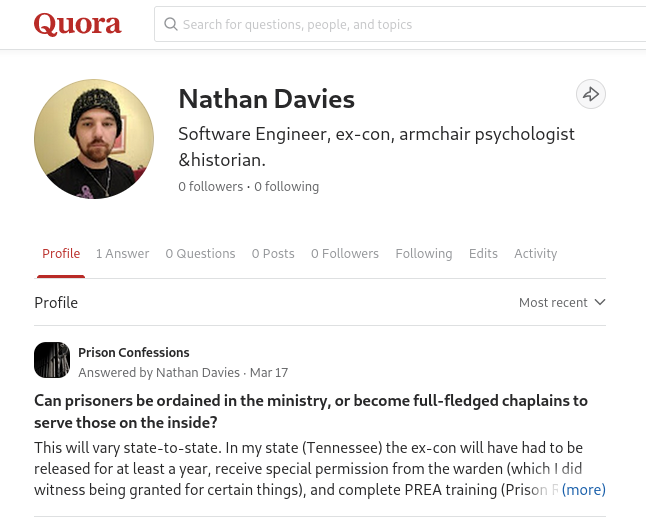 Now that Davies is out of prison and sits in his home office “coding and reading poast all day” he runs his computer consulting company Davies Technologies based out of Moscow, Tennessee. This is how he pays for his home “in cash.”

With the amount of homophobic and transphobic tropes that Poa.st users post about “pedos” and “grooming” it’s ironic that an IRL convicted child rapist is among them. But with the amount of questionable anime-girl posts on that site perhaps it isn’t surprising. Although Pride Month is coming to a close for this year, it doesn’t mean we are going to stop exposing the Nazis and racists of Poa.st or anywhere else.

But for now, let’s end with one of Davies’ great goals in life:

You’re well on your way, Nathan.