This week in federal court, twenty-four defendants are facing a lawsuit for organizing and participating in the deadly “Unite the Right” rally held in Charlottesville, Virginia in August of 2017. Sines v Kessler alleges a conspiracy on the part of the defendants to deprive the plaintiffs of their civil rights. Jason Kessler, the rally organizer for whom the suit is named, is joined by 23 co-defendants such as well-known neo-Nazi personalities Christopher Cantwell and Richard Spencer. The names of other persons involved in planning the deadly event have also come up in courtroom testimony. Some of those named have been exposed, but many of the these neo-Nazis, white nationalists and bigots still have not been identified, and have thus far escaped accountability.

We would hate for any of them to miss out on the fun.

In that spirit, we bring to you today a key member of the white nationalist gang Identity Evropa (which is now defunct, but rebranded as the “American Identity Movement“) who has thus far flown under the radar despite being a highly visible member of the group, as well as being one of the key figures in organizing the Unite the Right rally. He called himself “Ajax” or “Jack Pierce.” For fours years he has eluded public scrutiny for his part in this deadly event, but his time is up.

A 23-year old “Ajax” once said: “We understand identity groups broadly like BLM, and to a lesser extent Zionism, on the level that most liberals and conservatives never will be able to because we recognize what it’s like to be completely uprooted and be without an identity and feel alienated from society at large.” This was the pseudo-intellectual excuse for Identity Evropa’s white nationalist agenda “Ajax” told Buzzfeed news in 2016. In private chats, however, “Ajax” was far more blunt. Writing as “Jack ‘Ajax’ Richardson,” he told another user in leaked Discord chats “I’m a bigot and proud.”

“Ajax” also appeared in a second Discord account (“Punished Ajax”) which appeared after the Unite the Right rally. In both of these accounts “Ajax” freely expressed his racist and antisemitic attitudes, as well as his escapades in distributing propaganda for Identity Evropa. He also revealed a number of personal details, like the fact that he was born after the 1980s… …and that he had several sisters, of which he had a rather low opinion of… …and that his father had been in the Marine Corps. “Ajax” also implied that he had military experience in several posts. In the second “Ajax” account which appeared after the Unite the Right rally, he used a new picture for his profile image, which was a crop from a larger image of himself holding a tiki torch during an event.

This photo was taken on October 7, 2017 when “Ajax” and his gang of Identity Evropa thugs, along with Richard Spencer, returned to Charlottesville for a brief rally, eloquently detailed by Jalane Schmidt.

There was now a face attached to the “Ajax” persona and we were able to place him in other events as well, such as the November 2016 conference of the National Policy Institute, a white supremacist lobbying group, with other Identity Evropa members. “Ajax” could also be found at the June 2017 “Free Speech” rally alongside Richard Spencer and members of other white nationalist groups.

“Ajax” was a key figure in the planning and organizing of the violent 2017 “Unite the Right” rally in Charlottesville, Virginia and conducted part of the planning in the leaked Discord chats, as in the message below where “Ajax” is coordinating transportation to the rally.

The event turned into a violent affair and resulted in many injuries and the death of an antiracist activist, Heather Heyer, when she was struck by an automobile by the now-convicted murderer James Alex Fields. Organizers of the rally claimed that they did not intend for any violence to occur and that any violence that did occur was due to the actions of antiracist demonstrators, but this is a weak argument in light of the evidence of what actually happened.

Newberry called Pierce’s cell phone and told him, “There’s never going to be a better time
than right now.” Pierce said he understood and responded that he would get everyone
together and call Newberry back. A few minutes later, Pierce called back and told
Newberry that the speakers had changed their minds about coming in separately because
they wanted to “walk in with their audiences.” There would be no police escort from
McIntire Park. Newberry told us that he had a hunch that Pierce had been tricked into
working with him and that the rally organizers had never planned to be brought in through
the back of the park. After the call ended, Newberry turned to his partner in the van and
told him, “They do not plan on this going well.”

However, Detective Newberry’s actual sworn declaration on this interaction makes an important distinction (italics ours):

Mr. Pierce called me back a short time later to tell me for the first time that the speakers no longer wanted to use the police escort. Within several minutes of this call, I saw 8-10 large vans each drop off twenty or so demonstrators, many of of whom had shields and other armament, on the back side of the Park, which was the area where I told Mr. Pierce the police escort would drop off the speakers. My immediate reaction was that we had been duped by Mr. Pierce and that the speakers had never intended to cooperate with the security plan they had agreed to. I recall turning to Detective Braden Kirby of the Charlottesville Police Department at the time and stating, “They [meaning Mr. Kessler and his security personnel] have no intention of this going well.

In short, “Jack Pierce” was intentionally deceptive in order to facilitate a violent confrontation against antiracist demonstrators. Audio of the exchange between “Jack Pierce” and Detective Newberry is available for listening at the Internet Archive.

That same statement by Detective Newberry indicated that the identity of “Jack Pierce” was believed by city officials to have been “Allison Pierce III.” The name “Allison R. Peirce” had also been associated with the name “Jack Pierce,” although pinning his name down conclusively had thus far been elusive.  There are a number of people named “Allison Peirce,” even despite the unusual spelling of the last name, and none were found to be a match for “Ajax”/”Jack Pierce,” either age-wise or visually. That is, until there was a match.

As it turned out, “Ajax” is actually a kind of “Allison R. Peirce.” The fourth kind, to be precise. Allison Richard Peirce IV, born 13 July 1993, is an Indianapolis/Brownsburg, Indiana resident, which explains his heavy involvement with Indiana Identity Evropa affairs. The easily confused spelling of his surname as well as the fact he is the fourth generation to use that name likely increased the difficulty in identifying and locating him. Consistent with statements made in the Discord chats, his father is a USMC veteran and he does have several sisters, confirming that this person is indeed the “Ajax” we are seeking. He is also frequently known as “Jack,” as indicated by Facebook posts by people in his personal circles. But as they say, a picture is worth a thousand words. In this photo found on Facebook, Allison Peirce IV is pictured in 2016 with his then-girlfriend now-wife, a Brownsburg area certified massage therapist. They married in 2018.

It is our normal practice to redact information pertaining to uninvolved persons around the subject of our investigations. We are going to give Allison Peirce IV’s spouse the benefit of the doubt, even though we find it highly improbable that she had no knowledge of her husband’s activities considering how deeply involved he was in the “Unite the Right” rally and Identity Evropa operations.

Allison Peirce IV’s last employment that we are aware of was with Servicemaster DSI of Indianapolis where he works as a “restoration crew chief.”

This is consistent with interests posted on his Pinterest page: Nazis and woodworking.

Despite his implication of military experience in the Discord chats, we have found no indication that Allison R Peirce IV ever served in active duty status in any branch of the armed services.

No One Gets A Pass

While it has been four years since the “Unite the Right” rally happened, the significance of the event cannot be underestimated. To much of the populace who were not aware of the racism that exists beneath the genteel veneer of American life, it was, perhaps, a shock to the consciousness to see the marching crowd of white nationalists wielding torches on that night in Charlottesville. Allison Richard Peirce IV was one of the people that made it happen and for that he must be held accountable. 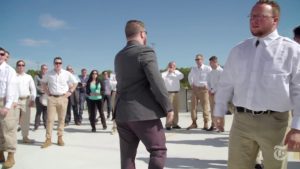