What do you do about a white nationalist pastor? One such who calls himself “Super Lutheran” has been hosting a podcast on the neo-Nazi podcast network “The Right Stuff” network called “The Godcast.” It turns out he is an actual Lutheran pastor and describes himself as “particularly Lutheran” while he espouses racist and white nationalist ideology on social media and in his podcasts. We wanted to know who this guy is, so we found out. We present to you: “Super Lutheran”

“Super Lutheran” and The Godcast Show

If you are a white nationalist and happen to be particularly religious you may have found yourself listening to a podcast called “The Godcast” (not to be confused with other podcasts of the same name) which bills itself as “the premier Christian podcast of the Alt Right,” and is hosted by two racist yahoos who call themselves “Myles Poland” and “SuperLutheran.” This podcast, which is a part of Mike “Enoch” Peinovich‘s neo-Nazi media network “The Right Stuff,” discusses religious topics with a consistently racist, antisemitic and homophobic bias. Broadcasting since before 2017, The Godcast has now produced 191 episodes, frequently featuring various white nationalist guests, like “Larry Ridgeway,” who also hosts a show on The Right Stuff network and the white nationalist author and podcaster Jesse Ogden, aka “Borzoi,” whom we exposed in an earlier report.

“SuperLutheran” also has a “Pro Unlimited” account on Soundcloud where he hosts his “Very Lutheran Project,” a solo podcast which covers his usual themes of extreme Christian conservatism and right-wing ideology.

A Member of Vanguard America

(Public) Militias Don’t Work.
Vanguard America is dead. I would know, I was part of it. Atomwaffen is a federal honeypot. Some groups are good, but they do other things. AIM and IE actually work on their members while engaging in activism; that’s good. Sure. Remember that members of Patriot front have been arrested lately just for putting up posters. If your radical group is putting up flyers and actively recruiting, expect the screws to get tighter and tighter.

Vanguard America’s position was explicitly fascist and although they claimed on their website that “Members who wish to commit criminal acts are expelled, and those left are those who assuredly respect the law,” it was Vanguard America that instigated a large part of the violence that occurred at the 2017 “Unite the Right” rally in Charlottesville. James Alex Fields, the individual who murdered antiracist activist Heather Heyer at the rally, was a member of this group.
Before he took up the moniker “SuperLutheran,” he used the name “@LutheranRight” on Twitter, where he attempted to recruit and spread engagement for the Washington state chapter of Vanguard America, also known as American Vanguard. In the archived tweet pictured below, he invited participants to fight training for the group. Two known neo-Nazis (@VanguardWA and @tradtablier) are also mentioned in the tweet. More information on these two individuals will feature later in this report.
The “LutheranRight” Twitter account was representative of its author’s main interests: extreme conservative religion and fascist ideology. In one tweet he wrote: “The most successful dictators of the 20th century were all believers in Christ, and most of them I know of were fantastic role models.” In another: “You have nothing to lose and everything to gain by believing in Jesus. Especially if you are on the Right, and hate modern degeneracy.”At the time of “SuperLutheran”’s membership, Vanguard America’s website featured manifestos which detailed their expected role in an upcoming race war and their goal of an all-white ethnostate:

Our America is to be a nation exclusively for the White American peoples who out of the barren hills, empty plains, and vast mountains forged the most powerful nation to ever have existed; it is logical that America must be once again built from the ground up to recapture the glory an Aryan nation deserves.

We want to be at the forefront of the reawakening of White racial consciousness. In order to do this, we must be willing to fight. Our enemies are many, and persecution is certain, but we welcome this, because when times are tough, the weak fall away, and the true revolutionaries will remain. We are faced with a great task, and only the finest patriots will be able to win this war.

Biblical passages such as these were sprinkled throughout their messaging:

Blessed be the Lord my strength, which teacheth my hands to war, and my fingers to fight. -Psalm 144

“SuperLutheran” appeared to have had significant influence over the religious content of the Vanguard America propaganda. He can be linked to a deleted twitter account going by “@ChaplainAV” and several blog posts on the Vanguard America website are credited to the “Vanguard America Chaplaincy.” One 2017 post entitled “On Israel: the Church or the Jews?” deals with the relatively obscure theological concept of supersessionism and was clearly authored by someone with an advanced religious knowledge. In summation, the basic intent of the article is to provide a scholarly Christian rationale for antisemitism while promoting various Jewish conspiracy tropes. In this essay the author (likely “SuperLutheran”) wrote: “Communism, the Holodomor, the Red Terror of Spain, the modern pornography industry and the corruption of the mass media – all have origins directly from, or owing heavily to, Jews.” Another article on the site entitled “Embracing the Curse” reads like a misogynistic sermon revealing the author’s roots in the “manosphere” with its conclusion that “feminism gave us the most bitter, unhappy, angry, and sorrowful women on the planet”.

[Note: Although Vanguard America is “officially” defunct, it transformed into Patriot Front and continues to promote white nationalist, neo-Nazi ideology.]

Like several people on whom we’ve previously reported, “Super Lutheran” also has a presence on the racist social media Fediverse instance Poa.st on which he likes to post white nationalist sentiment, his racist/antisemitic religious spins and exercise tips.

One of the common themes that “SuperLutheran” writes about are “Christian” justifications for the use of violence. On his Poa.st timeline “SuperLutheran” advertised his private “white fight” Telegram messenger channel and featured an illustration of a boxing match in which a light-skinned man strikes a dark-skinned man. “SuperLutheran”‘s justification for violence is particularly focused on racial violence. “SuperLutheran” does not limit his bigotry to racial matters. In another post he extends his bigotry and religious extremism to transgender people, describing them as people who have “mutilated” their bodies to “rebel against the way God created him.” While he ponders on “How terrifying the prospect of resurrection must be for the transgender individual,” “SuperLutheran” offers no compassion for any of the mental anguish he supposes. The “LutheranRight” Twitter account had a fixation with the Argentinian dictator Jorge Rafael Videla and used an image of Videla for its profile image. “SuperLutheran” also posted about Videla on his Poa.st timeline, providing further support that the same person was behind both of these accounts. Again, in this this discussion thread, “SuperLutheran” uses a religious justification for political violence, writing, “Both dictators [Pinochet and Videla] being Catholic meant they’d be down to listen to a higher authority, and they ended up being friends after that. After this they worked on Operation Condor together, blackbagging communist terrorists. Best. Dictators. Ever.”

He also complains on Poa.st about how his military service didn’t do anything to protect racists, neo-Nazis and right-wingers, writing: ‘The whole conceit of Veterans day is honoring people who “served,” who “fought for your freedoms.”…But it seems to me that the only freedoms I fought for are freedoms for people who hate me. Certainly wasn’t for the first amendment rights of guys at the C-ville trial right now, getting a SLAPP suit for showing up to a protest.’ By “guys at C-ville” he refers to the scores of neo-Nazis that attended the rally to commit violence.

“Super Lutheran” didn’t want to be identified on Poa.st and expressed that he had some tattoos that someone might recognize, so he was careful with his photography. But he didn’t really have to be careful with tattoos in his photographs, since it was something else that tipped us off. “Super Lutheran” used Gravatar, a service for providing globally unique avatars, allowing users to easily recognize each other across internet media platforms. Conveniently for us, “Super Lutheran” had also attached his real name to his Gravatar: Blake Kilbourne.

Blake Louis Kilbourne is currently a pastor at Our Saviour’s Lutheran Church in Dickinson, North Dakota. He was born on October 1, 1990 in San Diego County, California and, according to his LinkedIn page, attended Oceanside High School and then spent a year at the University of California, San Diego where he was a member of the College Republicans Campus Crusade. After that, he enlisted in the US Navy, serving from 2009 to 2014 as a Navigation Electronics Technician on the USS Ohio. He also had a heavy metal music project while he was in the navy at Grouton, Connecticut called “Eulogist,” as indicated by his Myspace profile.

Kilbourne ended up in Bremerton, Washington at the conclusion of his naval service and became a pastor at Emmanuel Lutheran Church in Bremerton. At some point, Kilbourne wound up in some trouble at the church and got fired from his job as pastor in July 2021, as he explained on Poa.st.

Following this, he attained a position as pastor at at Our Saviour’s Lutheran Church in Dickinson, North Dakota.

We are normally careful about redacting information about uninvolved persons, but we found that Blake Kilbourne’s wife, Sharon, is just as fascist as he, and she was not shy to admit it on her Twitter account, “S” @Fashy_Wife. In one tweet she even wrote wrote that she was “proud” when someone accuses her of being a Nazi. In another she exclaimed that “she couldn’t be happier” that America was failing women, minorities, Muslims, immigrants and LGBTQ persons.

In yet another tweet she wrote that she and her husband were watching the neo-Nazi documentary Adolf Hitler: The Greatest Story Never Told, followed by the hashtag “#heilyeah.” Sharon Kilbourne frequently interacted on Twitter with known neo-Nazis Matthew James Carroll and his wife Rosalee Lorraine Carroll, also known as “Mr. and Mrs. Maci” in neo-Nazi circles. Matthew James Carroll used the Twitter handles “@TrueRebellionWA,” “@VanguardWA,” “@MJsee3parole,” and “@matthew_maci,” among others, and has been associated with the neo-Nazi groups Vanguard America and Atomwaffen Division. Rosalee Carroll used Twitter under the names “@tradtablier” and “@ladycascadia” among others. This neo-Nazi couple was originally exposed by Eugene Antifa. Amusingly, Sharon Kilbourne posted a photo on Twitter of herself and a child with her “SuperLutheran” husband Blake lounging about in the background. We wonder how his wife feels about her husband’s decidedly “manosphere-esque” take on romance, since he once wrote:

I just published an essay on pornography addiction that advises husbands to practice the Disciplines and learn seduction. From personal testimony, the moment one starts picking up on PUA [pick up artist] techniques and stops pedestalizing [sic] his wife, the marriage bed becomes a lot more fruitful.

Say “No” to Neo-Nazi Pastors!

Blake Kilbourne and his wife Sharon have had a long history of religious extremism and racial hatred. Having been a member of the neo-Nazi group Vanguard America and now a pastor of a Lutheran church, Blake Kilbourne continues to espouse white nationalist ideology and extreme religious conservatism. His wife Sharon has been a happy accomplice in all of this, associating and collaborating with known, active neo-Nazis.

Blake Kilbourne may currently be found in Dickinson, North Dakota as the pastor of Our Saviour Lutheran Church (they also have a Facebook page). 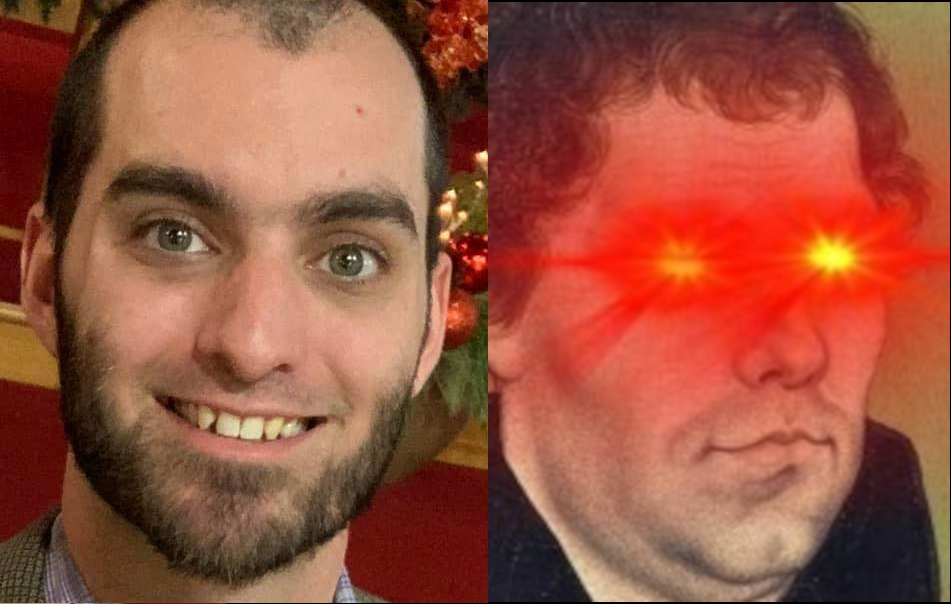