“Uncle Dad” of the Bowl Patrol

Another Bowl Patrol member whom we have not yet addressed goes by the alias “Uncle Dad” and has been a steady participant in the antics of the group for a long time. He is a fixture in Bowl Patrol Telegram messenger chats and has appeared in numerous episodes of the Bowl Patrol’s intermittent podcast “The Bowlcast.”

“Uncle Dad” is also a prolific poster of memes that celebrate racial violence and mass murderers.

It is also concerning that “Uncle Dad” frequently encourages mass violence, an example of which is this statement he made in a public Telegram chat:

When we previously exposed Benjamin Lambert as “Cheddar Mane” and Thomas Gipson as “Hardmous” there was another name that caught our attention. A certain “Ronald Evans” had signed as one of the organizers of Lambert’s limited liability company “Lambert Technology Solutions.”

“Ronald Evans” is also interesting because a “Ronnie Evans” had reacted to a post on the Facebook page of Andrew Casarez, whom we exposed to be Bowl Patrol de-facto leader “Vic Mackey.” It was clear to us that this Ronald “Ronnie” Evans had some connection to the Bowl Patrol.

That connection became clearer when examining the public Telegram chat belonging to “Uncle Dad.” In this chat Lambert (writing as “Hombre Cheddar”) indicated that he and “Uncle Dad” had an in-person friendship and related a story in which he and “Uncle Dad” harassed some people he claims were “antifa.” 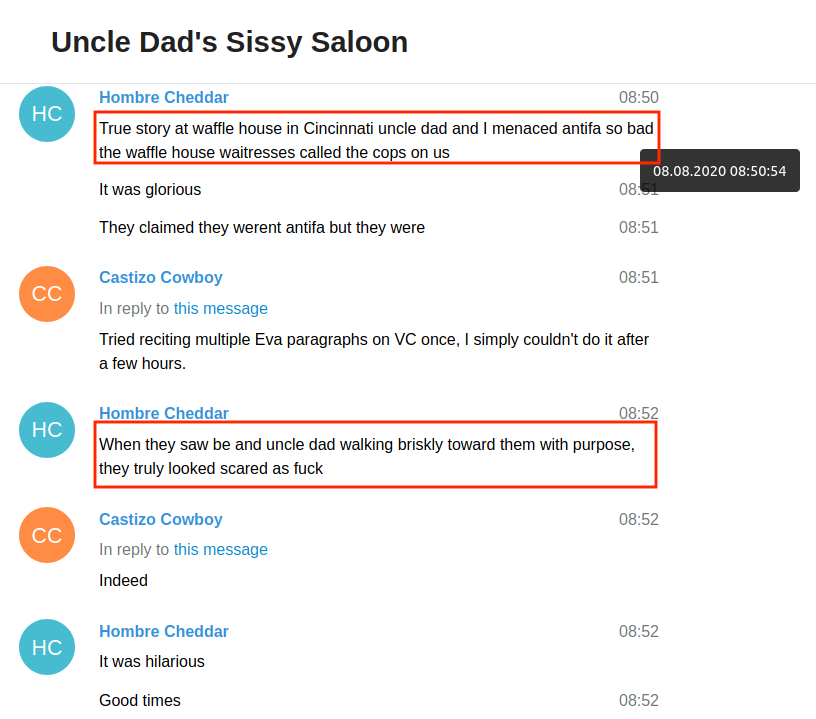 Elsewhere in the chat Lambert even offers to buy a car for “Uncle Dad,” indicating that their relationship is close enough that Lambert would make a rather large purchase for him.  At this point it was worthwhile considering that “Uncle Dad” may actually be “Ronald Evans” of Dayton, Ohio. 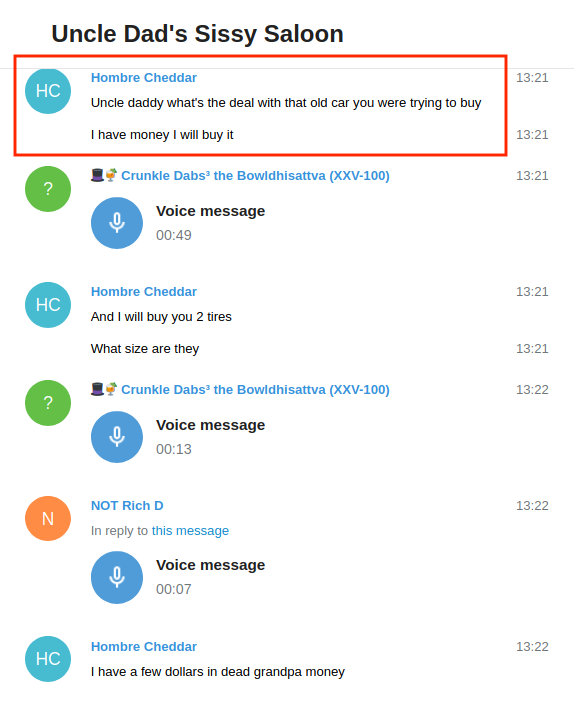 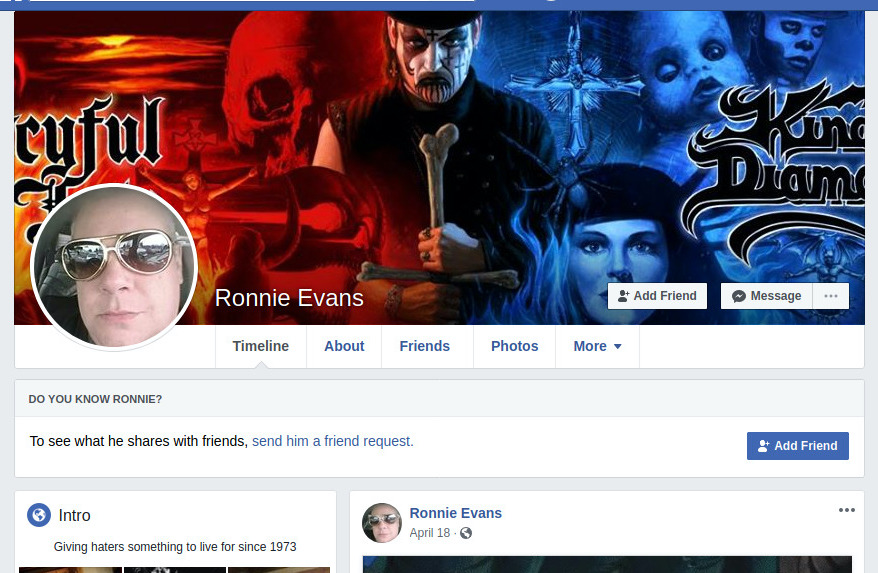 From this it looks that Ronnie Evans was likely born in 1973 and it appeared that he was skilled at playing guitar:

He also provided a link to his YouTube channel: 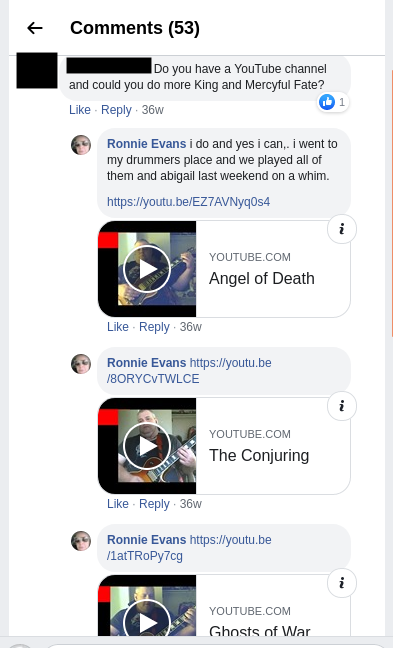 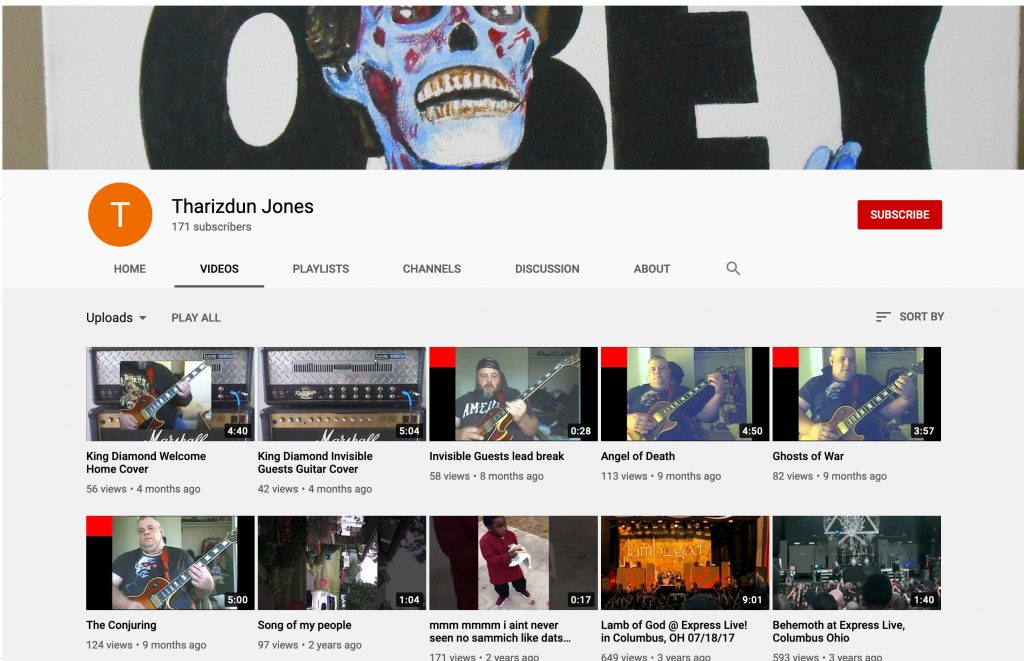 It is worthwhile noting that in one video, the man (who appears to be the same person in the Facebook account) is wearing a T-shirt with a stylized image of the Pittsburgh synagogue shooter Robert Bowers and has a similarly styled T-shirt in the closet featuring the Poway synagogue shooter John Timothy Earnest. 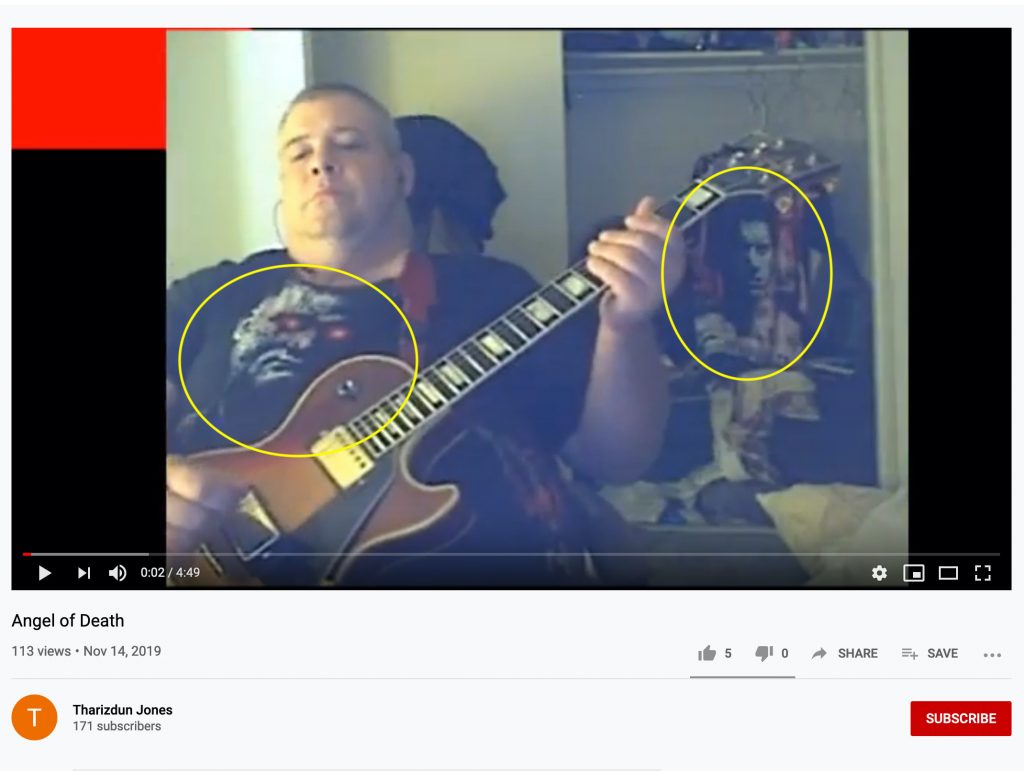 a game which we knew from the Telegram chats “Uncle Dad” enjoys.

However, what proved conclusively that “Uncle Dad” was the same person as the owner of the “Ronnie Evans” Facebook page and the “Tharizdun Jones” YouTube channel were a couple videos on the channel in which his voice may be heard. This voice is an unmistakable match for voice messages “Uncle Dad” posted in his Telegram chat.

In this video Evans narrates as he observes a wood chipper being used in his neighborhood. Wood chippers are frequent inside jokes within Bowl Patrol circles as they envision this to be their execution method for minorities and “race traitors,” or non-racist white people.

By this time we could say conclusively that “Uncle Dad” was, in fact, Ronald Andrew Evans of the Dayton, Ohio area and verified it by public records as well as connections to his family members, details of which we will not share to preserve their privacy. 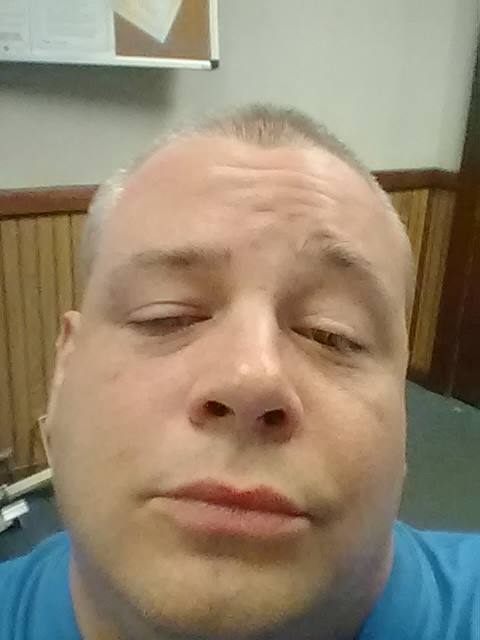 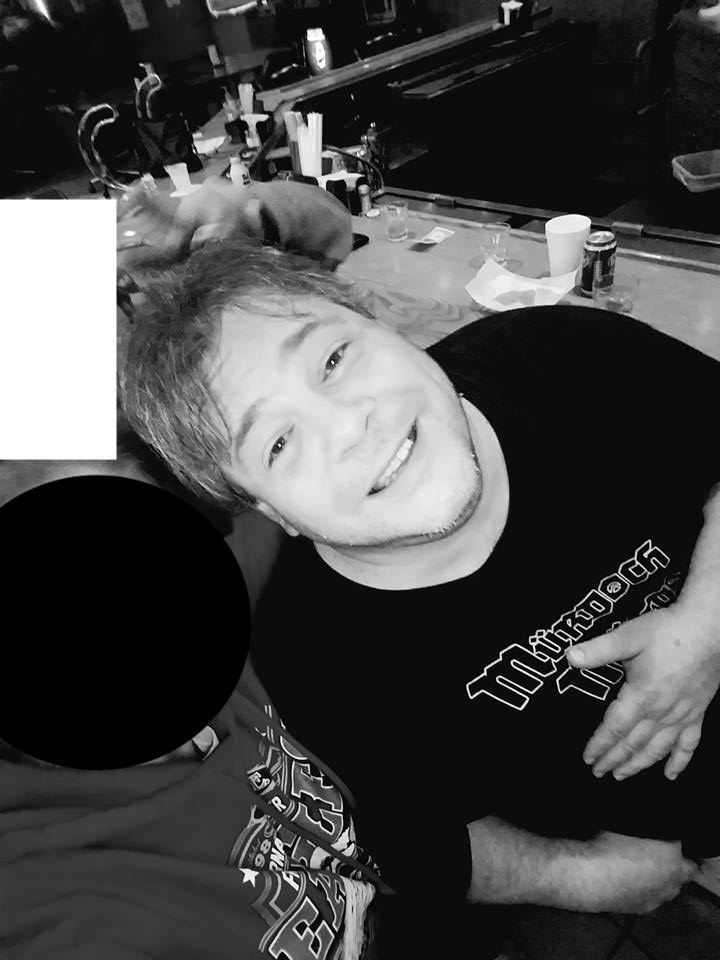 Ronald Evans’ date of birth is October 31, which falls under the sign of Scorpio.

Furthermore, “Joseph Goebbowls” posted an obscured photo of himself.

We can see from one of the photos Evans posted on his Facebook page that a growth on his left hand matches a growth on the left hand of the person in this photo. 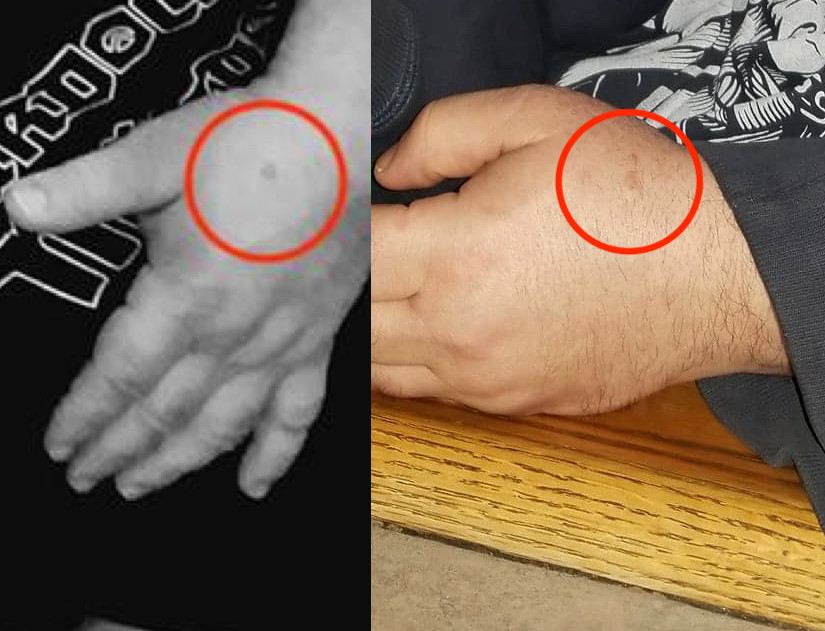 To cap it all off, “Joseph Goebbowls” posted this image on Discord:

This image was also used as Uncle Dad’s Telegram profile image at one time.

Ronald Andrew Evans is a resident of the Dayton, Ohio area, born October 31, 1973. At the time of the Discord posts Evans, writing as “Joseph Goebbowls,” claimed to have been working as a cook, but earlier in his life Evans had worked as an IT engineer, as reflected by his LinkedIn page: 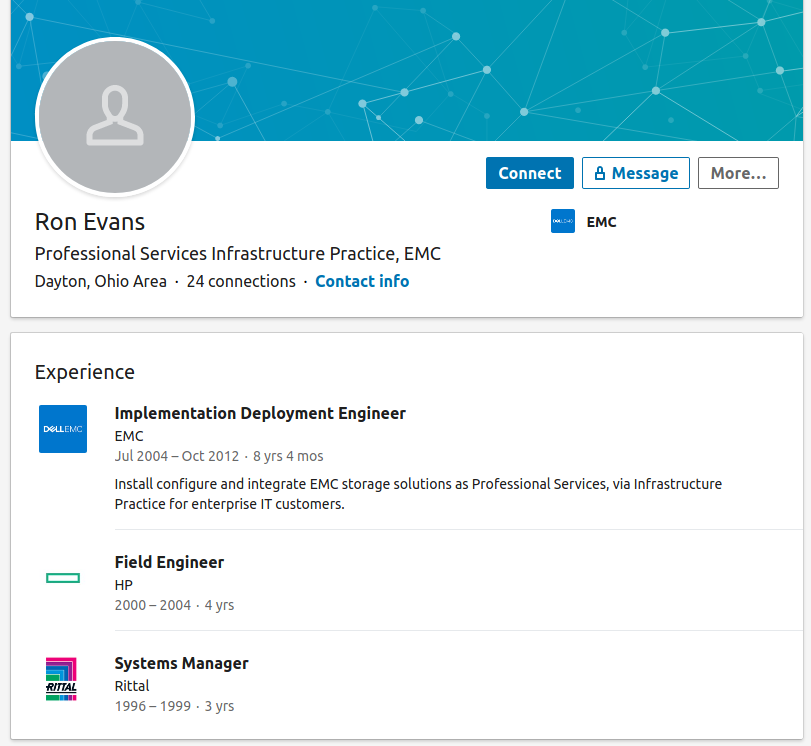 He blames his downward mobility on Jews:

We think it might be because, among other things, he is a violent misogynist.

In light of these considerations we feel that Ronald Andrew Evans is a danger to our communities and the public should be aware of his activities.

Notice on False/Incorrect Doxes Being Distributed

“Uncle Dad” has recently been the target of opposing racist circles on the Telegram messenger platform, who have attempted to dox him in part of their internecine conflict. Please be aware they are incorrect. They have irresponsibly exposed an uninvolved person through their carelessness and stupidity. Do not trust Nazi doxes. We have verified our information and have ensured it to be disclosed responsibly.

Special thanks to our friends @ utah161 on Twitter for their contributions to this report.