Today we are revisiting Jesse Daniel Ogden aka “Borzoi” and Rachel Elizabeth Carter Allen Ogden aka “Borzette”, “ChickenNuggerz”, and “Claire Nightingale” among other aliases, because this pair of neo-Nazi nerds recently relocated from Michigan to Montrose, Colorado.
As “Borzoi Boskovic”, Jesse Ogden is a semi-celebrity in the world of online neo-Nazis and racists, with hundreds of podcast appearances as well as blog articles, books, and thousands of online posts under dozens of aliases. He is viciously racist, antisemitic, and transphobic. (See our previous article, White Nationalist Podcaster and Author “Borzoi Boskovic” Revealed: Meet Jesse Daniel Ogden, for the gruesome details.)

As awful as Jesse Ogden is, however, his wife is at least equally horrifying, so let’s take a deeper dive into the online personae of Rachel Elizabeth Carter Allen Ogden, aka “Borzette”. Originally hailing from Tennessee, where she was an avid consumer of racist podcasts, her admiration for Borzoi expanded from online flirtation to a move to Michigan, conversion to Catholicism, marriage, and a child. Note that she still uses both her maiden name (Carter) and her married name from her first marriage (Allen) in her professional life. In Colorado she is a Registered Nurse with licence #RN 1675865, but she has nursing licences in various states under both names.

Jesse Ogden and Rachel Carter/Allen recently purchased a home in Montrose, Colorado so they could be near her parents. Although semi-retired, both of her parents are doctors, and her father works as an Emergency Room doctor at Montrose Regional Health.

Until recently, nazi nurse Rachel Elizabeth Carter Allen proudly described herself on her Poast profile as “wife of #1 racist podcaster” and had a picture of American Nazi Party founder George Lincoln Rockwell as her banner image. She wiped her profile — but not before we archived it. 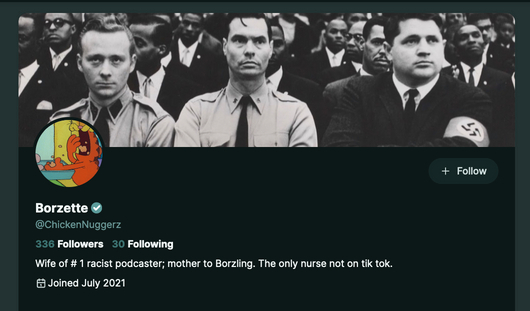 The long-dead George Lincoln Rockwell is hardly a household name these days and Rachel Allen’s tribute to him betrays her deep insider knowledge of and interest in the modern Nazi movement. (You can read more about Rockwell and his legacy here.)

Rachel Carter Allen aka @ChickenNuggerz’ social media highlights her racism in clear and unmistakable terms. In one post she states, “I do not like the black people,” along with a graphic of two people with different skin colours and the words “BE SMART/ STAY APART”. 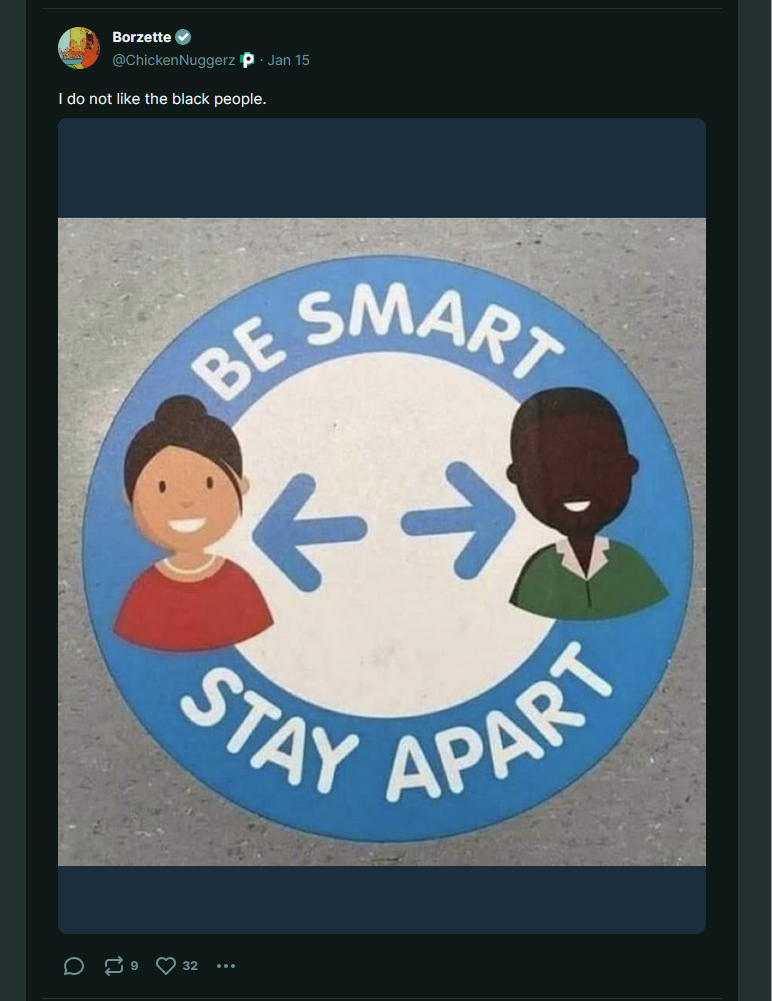 Nurse Rachel Allen does not indicate whether she makes an exception for Black patients, or simply refuses to treat them.

However, Rachel does post frequently on social media about her work as a nurse. Much of it is banal but verifiable material that helps confirm her identity. In some posts, however, she shares medical information about her patients in order to highlight her disdain for them and her own implied “superiority”. 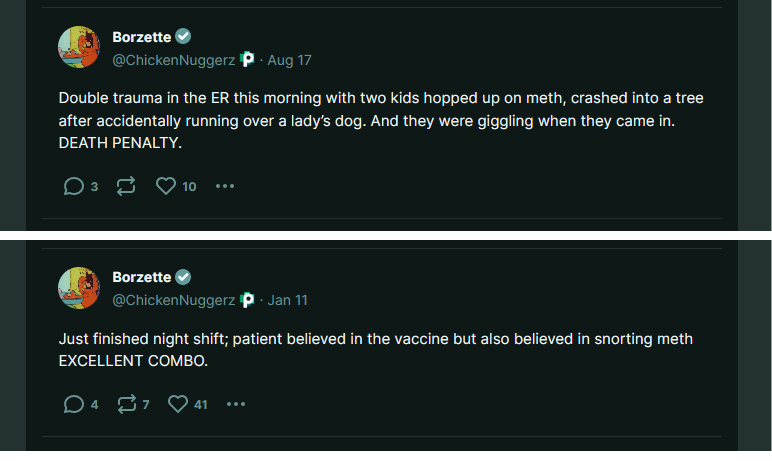 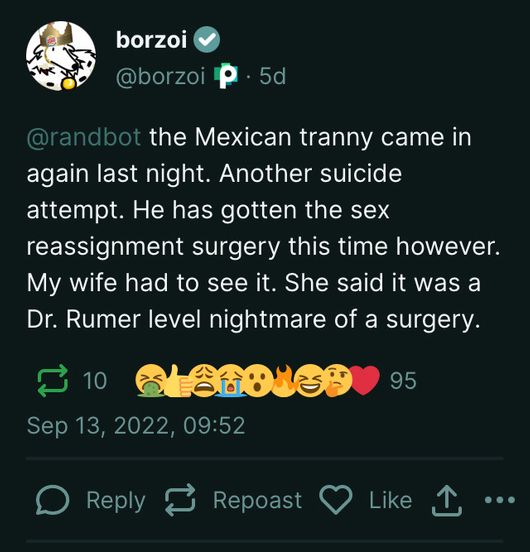 Montrose, CO nazi nurse Rachel Elizabeth Carter Allen also confessed on a podcast to stealing inhalers from the hospital for one of her husband’s nazi buddies

but frankly, we are more concerned with her admission that she listens to nazi podcasts at work.

As Borzette, Rachel Allen Carter has appeared on several racist podcasts and has recently launched a new one of her own, entitled “Dream Weavers,” with co-host Emily Youcis. Youcis is best known for getting fired from her job selling pistachios at Philadelphia Phillies baseball games back in 2016.

But we digress. The Dream Weavers podcast is described as “Casual Conversations for the Ladies,” which amounts to a couple of hours worth of racist and antisemitic screeds punctuated with abundant slurs. The extensive evidence of Rachel Carter Allen’s hatred for Jews, people of colour, and LGBTQ+ now includes more than thirty hours of archived audio recordings. A few examples:

On the most recent episode of Dream Weavers (Episode 13), while discussing the high cost of childcare, Rachel Allen Carter blurted out, “My theory is because nig*ers … my dad always says, ‘well, we ruined them, we ruined them’ meaning we ruined the black community with welfare, etc.”

In Episode 12 of Dream Weavers, Rachel Allen Carter praised the use of ASMR as a sleep aid, which led to the suggestion of creating “racist ASMR.” Carter then responded in a mock-soothing voice, “All the nig*ers, all the nig*ers are banished to Mars and all the Jews sink to the bottom of the ocean.”

Episode 10 features a flurry of racial slurs and a discussion of the diverse casting in the new Lord of the Rings. Rachel/Borzette bemoans the fact that J.R.R. Tolkien “fought for the wrong side in WWII” and “he was very anti-Nazi at the time. But he was also like, ‘look, this beautiful Aryan mythology needs to be preserved’. Well this is what you fucking get. You fought for the wrong side, and now, in your country, there’s Indians and Pakistanis everywhere, and your legacy has been completely torched.”

J. R. R. Tolkien, of course, fought in WWI, which ended five years before the NSDAP was founded. As for Rachel’s claims about Tolkien and “Aryan mythology,” Tolkien was a professional lexicographer and an etymologist (among other things); to him, “Aryan” meant Indo-Iranian.

Plowing ahead regardless, Rachel mentions that “there’s another Tolkien quote: ‘Evil sows the seeds of its own destruction.’ […] What you’re doing, you’re just creating your future problems, Jews.”

As ridiculous as nazi nurse Rachel Carter Allen and her dweeb husband may seem, they are significant figures in the neo-Nazi world and create massive amounts of propaganda for the movement. Rachel Allen is also a classically-trained musician and is currently working on a book about European folk music for neo-Nazi publishers Antelope Hill. While the subject matter may not seem controversial, Antelope Hill is an explicitly fascist and neo-Nazi propaganda outlet that has published much of her husband Daniel Ogden aka Borzoi Boskovic’s work. (See our previous article, The Neo-Nazis of Antelope Hill Publishing, for more information.) It seems a safe bet they will turn this “research” into another instance of nationalist propaganda.

More disturbing in the immediate sense, however, is the fact that neo-Nazi Rachel Carter Allen is currently licenced as a nurse in Colorado.

At some point we all find ourselves at the mercy of the discretion or good will of another person who has expertise we don’t have – auto mechanics, lawyers, etc. But people like doctors, paramedics, and nurses hold our well-being and at times our lives in their hands. Even implicit biases in these professions can and do lead to tragic outcomes. It is very concerning that Rachel Allen Carter appears to be employed as a nurse at Montrose Regional Health. Can the hospital really claim to offer the same quality of care to all their patients, regardless of their skin colour, while employing a virulently racist neo-Nazi as a nurse? We note with interest that the American Nursing Association claims to take bias in nursing seriously, and that a nursing license can be revoked for “conduct unbecoming of the nursing profession”.

If you feel inclined to register a complaint, be aware that there is more than one Rachel Allen working at Montrose Regional. The racist, nazi Rachel Allen is the one with Colorado licence # RN 1675865. 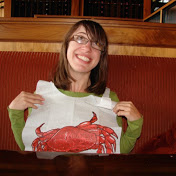