It’s a new year for the Anonymous Comrades Collective! It’s also a new year for neo-Nazi small press Antelope Hill Publishing, and we predict the new year won’t go well for them. The word is these Nazi ne’er-do-wells have been up to no good, even by Nazi standards, and have relocated their HQ to a new, “secret” location. We decided it’s time for an update!

First off, a little refresher on Antelope Hill Publishing. Last year we reported on the ringleaders of Antelope Hill Publishing who are Vincent Cucchiara (aka “Paulie“), a Green Lane, Pennsylavia real estate agent, his wife Sarah Cucchiara (aka “Maggie Bauer“) , a former public school teacher, and Dmitri Loutsik, college friend of Vincent Cucchiara and general all-around shady character. They were also featured in a must-read piece by the SPLC.

Antelope Hill Publishing has been publishing material for years by historical fascists as well as those currently in the scene, like Jesse Daniel Ogden (“Borzoi Boskovic,” also writing under the name “John Chapman“) and John Metz (aka “Jack McKraken“). Their published material has been prominent in white nationalist circles, who widely promote them to others in the scene.

Also featured in our previous piece was an individual named Freeman Rudolph Matthews III of Metarie and Baton Rouge, Louisiana, who registered an LLC and web domain name associated with Antelope Hill Publishing. We were unsure of Matthews’ roles in the Antelope Hill Publishing, but today can reveal that Freeman uses the alias “Louis,” as he has called himself on various interviews in neo-Nazi podcasts, and is an editor for Antelope Hill Publishing. Matthews was identified as “Louis” from his Skype profile, which was connected to his verified phone number. When we last left Matthews he had returned to Louisiana State University as a student after a stint in the US Army.

But on to the real drama…

The real drama began when a neo-Nazi Telegram channel made statements on January 13 accusing the leadership of Antelope Hill Publishing of exploiting one of their (now former) workers, paying him poorly, making him feel obligated to them and then unceremoniously kicking him to the curb. All this in this midst of making large profits from the business and purchasing a $750,000 property to serve as their new headquarters. We are declining to name this neo-Nazi Telegram channel because we don’t want to draw traffic to white nationalist rhetoric, but in the channel’s own words:

On Monday the 9th, our friend was unceremoniously ambushed by 3 people he considered practically family, had his house cleaned out of anything to do with the business, and was nearly bullied into signing a totally one sided and manipulative NDA. He was told the reason he was being let go is because Antelope Hill was “downsizing” and could no longer afford to keep him on. Our friend refused to sign the NDA, Praise God.

The facts of the matter are these. Antelope Hill made upwards of $900,000 dollars in revenue last year and they made $800,000 dollars the year before that. They paid our friend 2k/month to work for them (before taxes). He worked 5 days a week 9am-5pm and had to request sick days. All of this despite being, legally, an independent contractor. They justified paying him so little by giving him a place to live “for free.” This place is infested with black mold and rodents, issues that went unresolved despite being pointed out by multiple people close to our friend many times. For tax reasons $1,600 was extracted from his “salary” each month to pay the totality of the mortgage at this dump.

Paulie purchased a 750k home in the last few weeks to serve as the NEW Antelope Hill estate and headquarters. This is the second mortgage that they are currently supporting with dissident dollars. Our friend was left out of these accommodations and was told that nobody could know about the new AHP house because “Antifa and other unwanted eyes might find us again.” Our friend was betrayed by people he thought were his comrades and brothers because one of their 2 homes has a mortgage which is over twice what he gets paid in a month.

Many people get fired from jobs for all kinds of reasons. If either paulie or anyone else involved with the company had come alone and explained that they needed to let our friend go because of work performance, or something similar, this would be very different. What they did instead was arrive unannounced with a moving truck, a wannabe lawyer, and an NDA.

Our friend was told they had no one that was prepared to fill the hole they would be leaving by firing him. Why? Because none of them have been involved in processing or order fulfillment for nearly a year. IF they can somehow manage the level of orders they are currently getting has yet to be seen. We imagine they will have to hire or manipulate someone else into helping them very soon.

These events have been extremely troubling for us. This behavior seems so out of line with the principles and morals that we expect from a nationalist publishing house, let alone a “pure” National Socialist run publishing house that we decided to dig a little deeper…but more on that later.

We here at the [redacted] have been long time friends of this man. From our inception, we have shared posts and promoted Antelope Hill, on his behest because we believed in the mission. But no longer.

If what you have read so far gives you any kind of pause. We highly encourage you to suspend support for Antelope Hill for the time being. Everything will come to light. 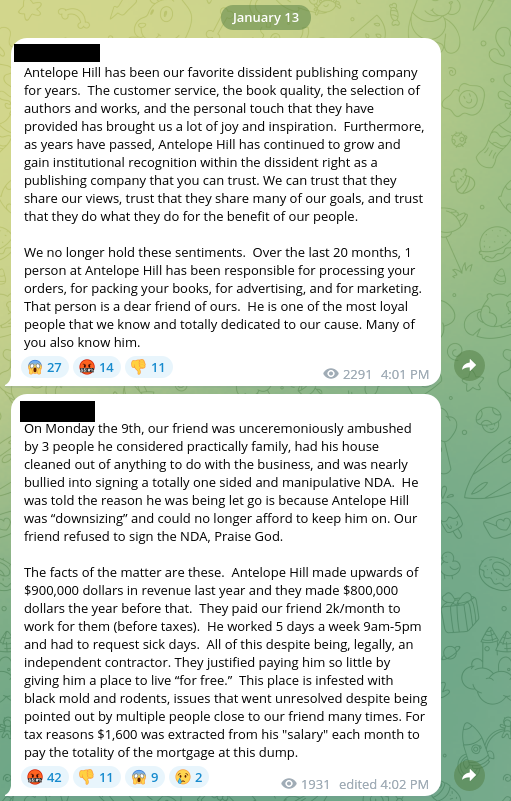 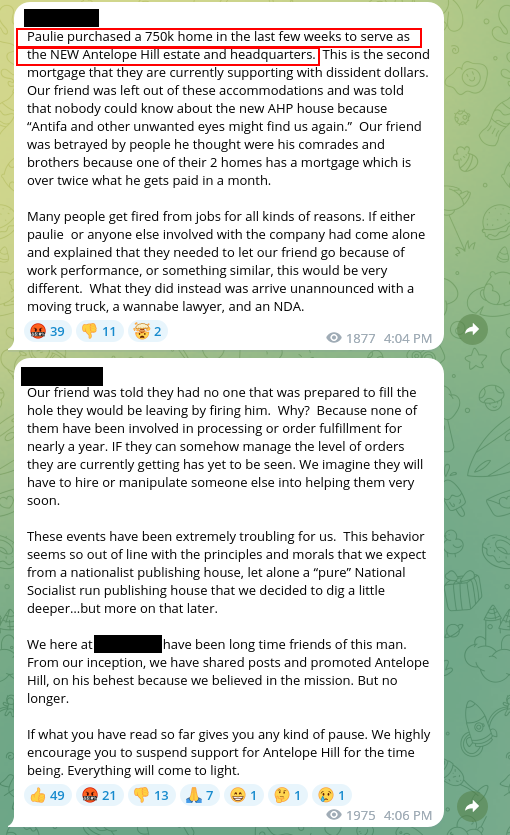 While this channel claimed that the employee was fired, Antelope Hill Publishing in public channels explained their issues with fulfilling orders as being due to their fulfillment personnel being sick. 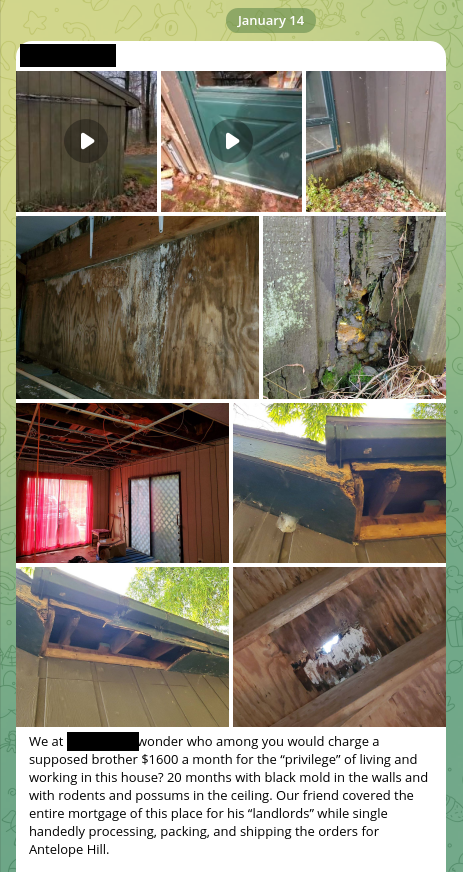 This Antelope Hill employee posted a lengthy statement to a Telegram chat regarding his situation. From this statement we learned that his first name is “James” and he uses the aliases “Postal Worker” and “Friedrich Drake.” Screenshots of his statement are pictured below (click on  image to open for a full-size view): 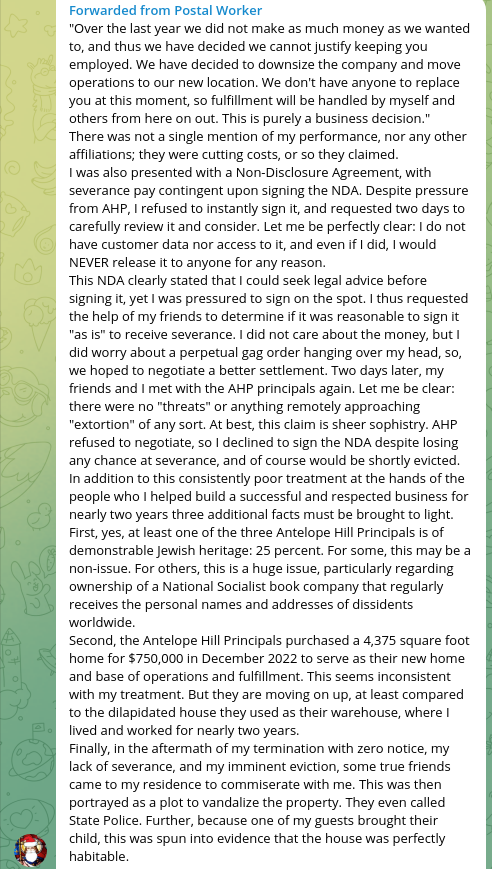 Other parties involved in this Nazi drama posted elsewhere on the internet a redacted copy of the non-disclosure agreement (NDA) that Antelope Hill Publishing wanted “James” to sign, showing that he is the owner of a limited liability company called Northern Ridge Services LLC. The first page of this NDA is shown below:

The Anonymous Comrades Collective has obtained a copy of the contract made between “James” and Antelope Hill Publishing LLC, pictured below:

Clearly visible is the signature of Freeman Matthews III, signing for Antelope Hill Publishing, proving that he is a principle in this neo-Nazi publishing company. What is not so clear is the last name of “James.” Can you read it? Let us know.

It’s funny that the writer of the Telegram post wrote that their “friend was left out of these accommodations and was told that nobody could know about the new AHP house because ‘Antifa and other unwanted eyes might find us again.‘” We did just that!

On December 9, 2022 Vincent Cucchiara and Dimitri Loutsik purchased a 5.2 acre property in Harleysville, Pennsylvania for $750,000, as reflected by public property records. On this lot stands a four-bedroom, four-bath 4,375 square-foot home which looks to be a significant upgrade from their previous HQ. While we won’t publish the address of the property due to the privacy restrictions of this platform, feel free to enjoy these public photos used on the real estate sales listing for this property. 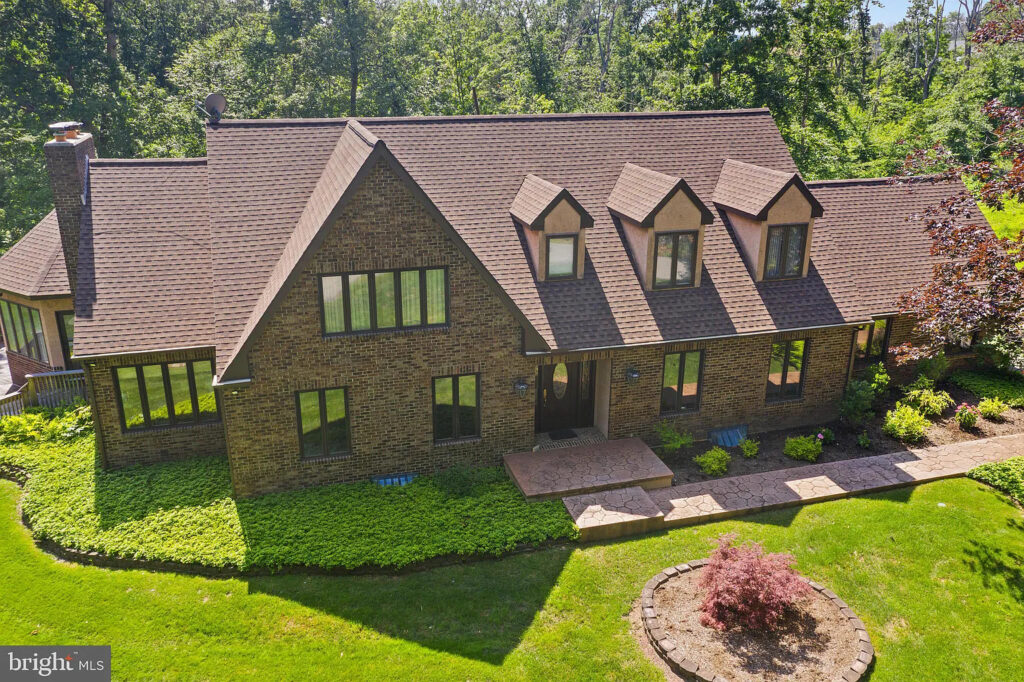 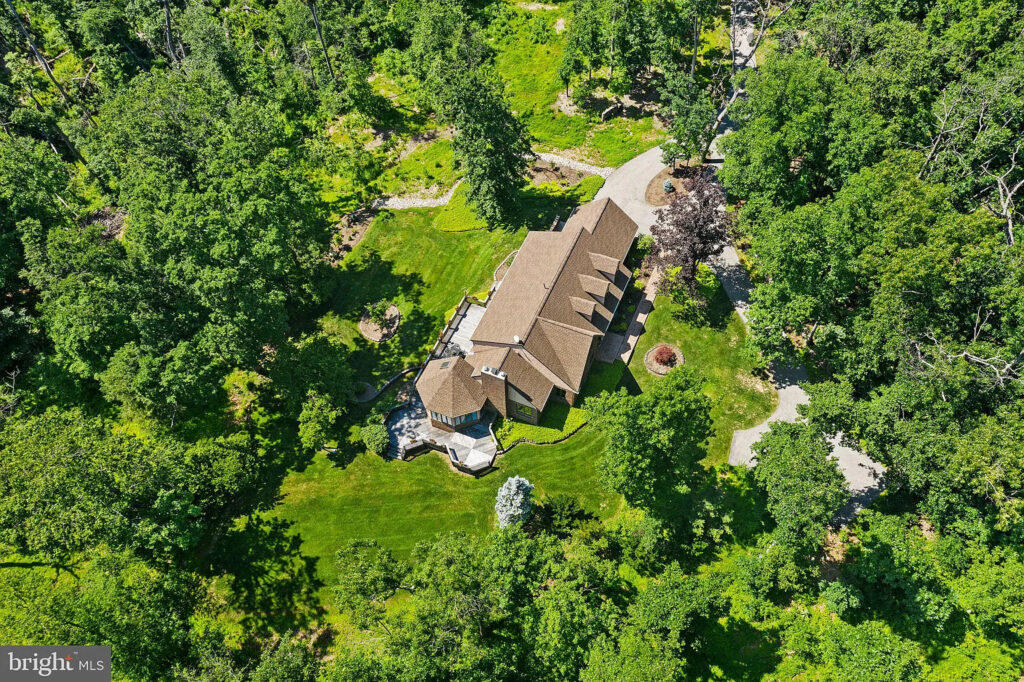 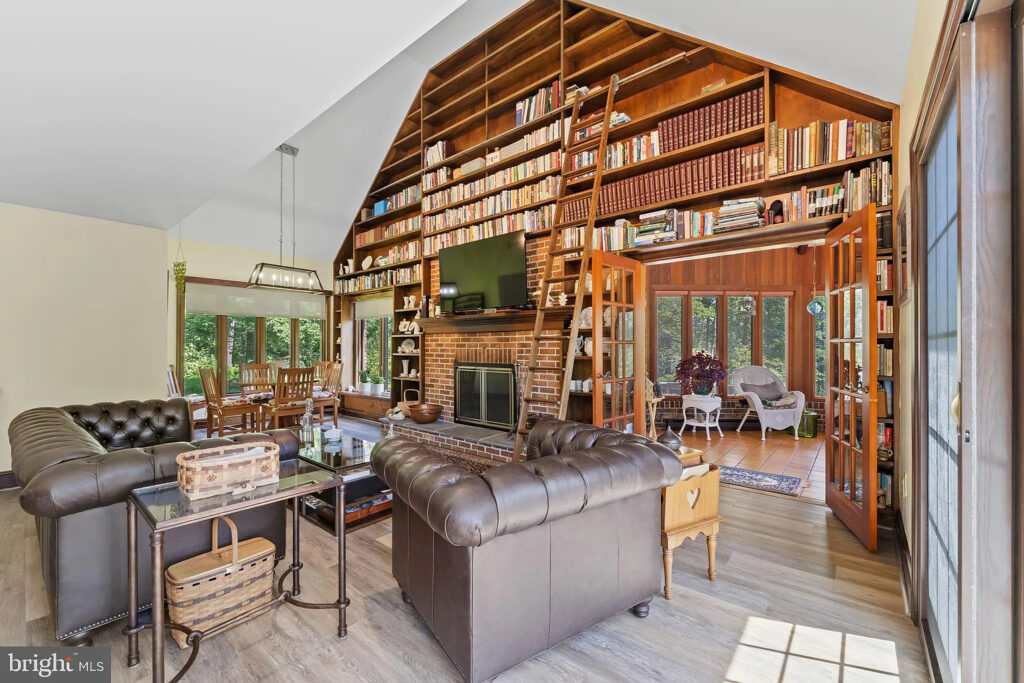 Nice digs, for a neo-Nazi small press, wouldn’t you say? We are not in the book business, but it seems to us that such an upscale property is unnecessary to conduct a neo-Nazi publishing business. But, hey– if you’re going to publish and distribute materials promoting hateful ideologies while screwing over your cohorts, might as well do it in luxury, right?

Of course, Vincent Cucchiara has some familiarity with the real estate business. When he was exposed as the leader of Antelope Hill Publishing he was working as a real estate agent. Since his exposure, the agency he was working for let him go, but he has continued in real estate, now working for The Virtual Realty of Pennsylvania, as shown on their business page at the time of writing. Curiously, Vincent Cucchiara’s handful of recent real estate transactions involve buyers with white nationalist ties, which may pique the interest of the inquisitive-minded.

Considering Antelope Hill Publishing’s prior history of attempting to obscure the identities of their company officers through layers of LLCs (outlined in our previous article), we have to wonder about what sort of weird tax avoidance scheme they might be running. Considering Antelope Hill Publishing’s prior history of incompetence at using LLCs to obscure their identities, we figure that they will fail and will be found out. They are not nearly as clever as they think they are.

“Antifa and other unwanted eyes might find us again.”

We love it when Nazis don’t even get along with each other. But the important thing to know here is that Antelope Hill Publishing has been distributing white nationalist, pro-fascist, Nazi material for years now, under the guise preserving “lost works” and defending “lost causes, righteous mercenaries, anonymous critics, freedom fighters, revolutionaries, and exiles.” They have used Amazon to sell their works and Stripe to process their online payments, yet these companies are reluctant to act on accounts that bring them revenue. With their former headquarters exposed, they relocated. But we found them again and you have a right to know the neo-Nazis in your communities.

Having bought a $750,000 property and earning a reported revenue of $900,000 in a year, Antelope Hill Publishing is clearly able to generate money. The question is, for whom? Their white nationalist movement? Or themselves?